Photo of Newsweek cover, depicting a photo of DSK’s face opposite Diallo’s, with the words “Exclusive: DSK Maid Speaks” between them. 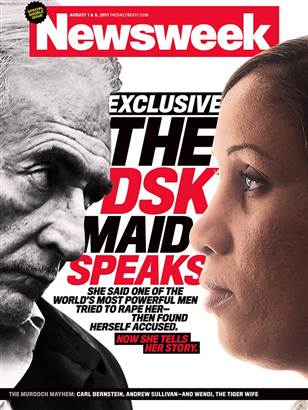 Nafissatou Diallo, the hotel maid who accused Dominique Strauss-Kahn of raping her, has given her version of events to US magazine Newsweek in an attempt to clear her name.

Well I for one don’t think she’s lying about what DSK allegedly did to her. The evidence points to sexual activity occurring in the room, her injuries were consistent with her story and DSK seems to have past form. And as ever when the woman lying to get money/revenge narrative is rolled out, the likelihood of her winning a rape case – let alone one against such a rich and powerful man – is so slim that I find it hard to believe she’d go through the ordeals of the medical examination, police questioning and inevitable character assassination in court (among others) for a vague chance of a pay-out. She says:

And I hope she takes him down.