Women’s football: a kick in the teeth?

The World Cup has kicked off. Didn’t you know? If not, that’s because the competition has been surprisingly unreported.

England have a real chance this year of going the distance; it could happen for us in Germany. Where’s the relentless build up? The tacky flags and plastic noise makers? Why are the TV schedules so miraculously normal? There’s the part that I didn’t mention; it’s the Women’s World Cup.

Just feel this silence for a moment, really take time to notice the absence of teary eyed rhetoric, emotional montages and over-full pub doorways. It’s a parallel universe, a time when football is not everything, match tickets are not bandying around for three or four times their original value, flights to the host country haven’t rocketed in price.

Indeed if you were so inclined you could purchase yourself a seat at a game for as little as €6. But you’re not inclined and neither is anyone else it seems.

Women’s football has had a big moment. It began to garner popularity during the First World War, while the men’s league was disbanded, and continued to draw crowds into the early 1920s with numbers sometimes reaching 50,000 spectators a match.

This was all brought to a sudden end in 1921 with the decision by the English Football Association to ban women’s teams from playing on any association ground. Women’s football was suddenly on the outside of the game. The reason given at the time centred around concerns about women’s health and the effect on their physiques that the game might have.

Suggestions have been made since that some men’s teams were threatened by the popularity of the women’s game after the league was restarted in 1919. It wasn’t until 1971 that women’s teams were again allowed to play on FA club pitches. There are still very few professional women’s players in England and those that do have a contract with the FA to play for England earn about £16,000 a year.

Women’s football still has little encouragement from inside the game. Sepp Blatter, president of the football world governing body FIFA, has made suggestions that women change the look of their strips and wear tighter tops and shorter shorts in the style of beach volleyball in order to get men interested in the game.

Instead of the men’s team being able to bask in a shared glory with the women, Charlton Athletic was forced to wallow in the defeat of the men

“Let the women play in more feminine clothes like they do in volleyball, they could, for example, have tighter shorts. Female players are pretty, if you excuse me for saying so, and they already have some different rules to men – such as playing with a lighter ball. That decision was taken to create a more female aesthetic, so why not do it in fashion?” he told The Guardian. It makes you want to throw your hands up in despair. 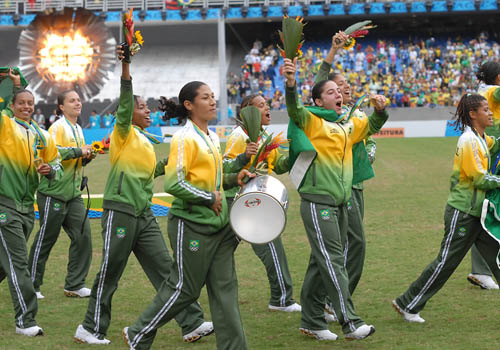 Former England goal keeper Pauline Cope contradicts him on his out of date reference to the lighter ball saying: “he doesn’t know what he is talking about. We don’t use a lighter ball.”

Women’s teams are now allowed to play wherever they want, but they are often the first victims of any financial deficits of clubs.

When Charlton Athletic was relegated it was decided that they would no longer fund a professional women’s team. The women’s team had in the last five years reached the FA Cup final three times, winning it once. The team had triumphed in the League Cup and Charity Shield twice and never finished outside of the top four between 2001 and2007, finishing as runners up on three occasions.

This is indicative of the gender divide and the preference for men’s football teams. Despite Charlton Athletic’s success they could not generate the sort of revenue needed to fund themselves. Instead of the men’s team being able to bask in a shared glory with the women, the women’s team was forced to wallow in the defeat of the men.

Those interested in the game need to start seeking out these games, find out if your local club has a women’s side. Take advantage of those bargain prices to go and watch a match some time

A tangled up kind of collaboration that could surely be managed better and for the greater good if support was drummed up for Charlton Athletic’s football teams as a whole rather than keeping this kind of segregation.

In an effort to garner some interest for the 2011 Women’s World Cup, the under 20s German team has decided to pose for Playboy. While their motivation may have been shear desperation, we don’t know, this sends a worrying message and backs up Blatter’s spurious suggestion. They posed wearing see-through shirts and tiny shorts turning women’s football into a kind of pole dancing with the added excitement of goals being scored.

The game needs advertising, it needs interest but not the type of interest that reduces it to being about looks and sex. Women playing the game desperately want to be seen as footballers not women footballers and that kind of respect and acknowledgement needs to be shown by all the players involved.

The game needs to become more cohesive so that players of all genders can be recognised for their skills and abilities not the shape of their bodies. Advertisers and sponsors are required to get this game out there and to get it registering on the radar of football fans. Those interested in the game need to start seeking out these games, find out if your local club has a women’s side. Take advantage of those bargain prices to go and watch a match some time. But most of all if those involved in football as a whole could begin to support the women’s game more fairly then perhaps it would have more of a chance in the outside world.