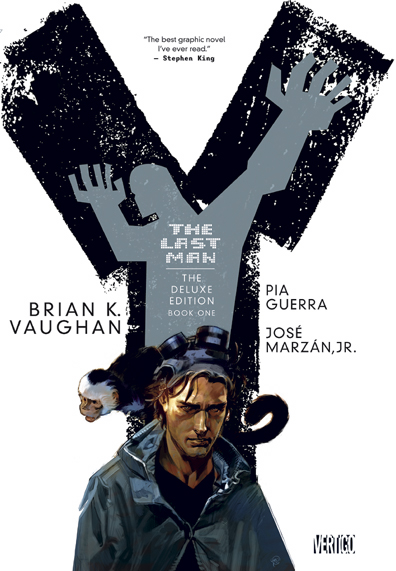 The premise of Y: The Last Man is simple: on a summer day in 2002, every mammal with a Y chromosome in the world dies at the same moment from a mysterious plague. The only exceptions in this universe, conceived by US writer Brian K. Vaughan and Canadian artist Pia Guerra, are Yorick Brown and Ampersand, the male Capuchin monkey he is training. Yorick, an amateur escape artist who was drifting in jobless limbo in New York before the plague, is only interested in reuniting with his girlfriend Beth, who is stranded in Australia.

But Yorick and Ampersand have become the most important creatures on the planet, a fact not lost on Yorick’s mother Jennifer, a Congressional Representative and one of a cast of interesting women surrounding Yorick. The world population has been cut in half by the plague, but more destructive is the interruption to trade and power and the vacuum in the highest echelons of politics and finance. The new President of the United States assigns a covert government operative, known only as Agent 355, to escort Yorick to meet the geneticist Dr. Allison Mann, with the intention of discovering why he is immune to the plague.

Along the way they attract the attention of the Amazons, a gang of women who cut off a breast to emulate the Amazons of old and are led by a charismatic woman known as Victoria. They believe Mother Earth has exterminated men to rid the world of women’s oppressors, and view Yorick’s existence as a threat. During the chaos that followed the plague, Yorick’s sister Hero joined the group and came to believe in their mission to eradicate Yorick. There is also an elite group of Israeli soldiers tracking Yorick and hoping to capture him for the benefit of their motherland.

The story quickly settles into journey framework: Yorick, 355 and Allison must travel across the country to a contingency lab to conduct the vital tests, after Allison’s primary lab is destroyed in a fire. Travel across the devastated country is difficult, and during their adventures they encounter women trying to rebuild their lives in a variety of ways, all the while trying to stay ahead of the groups that are either trying to capture Yorick and Ampersand or kill them.

Vaughan is obviously aware of the irony of having Yorick as the key player in the story, and that the entire future of the world hangs on solving his immunity to the plague

The concept allows Vaughan and Guerra to examine the fundamental power structures in society that favour and are dominated by men. In a single page before the start of issue two, key statistics are summarised which bring home the prevalence of men in key positions in important industries: 85% of all government representatives, 495 of the Fortune 500 CEOs and almost 100% of the leaders of certain religions are (were) men. It also underlines how vulnerable women are in a world where many of them have little experience or confidence of running society.

Vaughan is obviously aware of the irony of having Yorick as the key player in the story, and that the entire future of the world hangs on solving his immunity to the plague. Despite the radical social changes, and of being surrounded by capable women, Yorick often acts in a self-righteous, rash and privileged manner. Thankfully the smart, assertive women around him call him on it on nearly every occasion.

There is a refreshing range of complex female characters, from the easy-going to the outright crazy. To keep the action from lagging Vaughan switches between various character plotlines and timeframes at regular intervals and at moments that accentuate tension. Guerra’s artwork is clean, evocative and features a range of realistic body types, and José Marzán Jr’s inking is clear and well-judged. The result is a story that’s driven by an intriguing mystery and engaging characters.

Underlying the story is a consistent analysis of the impact of men on women’s lives, be it through patriarchal power structures or the dominant cultural meme that encourages women to look to men to lead and save them

While the story is extremely interested in the power dynamics between people and groups, sexuality and gender identity are not examined in any depth in this volume. I would have liked to see more thought put into how women’s sexual and gender identities would evolve without the presence of men and binary sexual models. There are no trans or inter-sex characters with speaking or walk-on parts, though trans men are mentioned twice in passing, without names or reference to specific people.

Underlying the story is a consistent analysis of the impact of men on women’s lives, be it through patriarchal power structures or the dominant cultural meme that encourages women to look to men to lead and save them. Even though women now have an opportunity to create the world anew, they often fall back into the default roles they’ve been taught.

Can women create an equal world for themselves when they have only ever experienced inequality in a society that is based on masculine principals? I don’t always agree with the conclusions reached or the scenarios posited, but what’s refreshing is seeing these topics explored in an engaging narrative.

This collected edition ends on a great reveal that will have you ordering the next volume immediately.

If you’re new to comic books this is an excellent story to serve as your introduction to the medium, and if you’re a confirmed fan you should already own a copy of this intelligent and thought-provoking series. The good news for those of you who missed the single issue comics is that you can now obtain the entire run as 10 graphic novels or five hardback deluxe editions.

Maura McHugh is a feminist, geek and writer who lives in the West of Ireland. Her short stories and poetry have appeared in publications in the USA and the UK, and she is the writer on two comic book series, Róisín Dubh and Jennifer Wilde, from Atomic Diner.