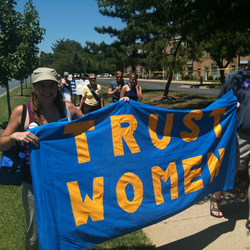 Abortions are not the same as pensions

The Government is set to announce changes to abortion law next week, which will involve pregnant women being offered ‘independent’ counselling, rather than receiving counselling from the organisation which is due to perform the procedure.

The change is being put in place by Nadine Dorries and Frank Field, both MPs, and the anti-abortion sentiments behind it are undeniable in the face of Dorries having

“criticised the “financial incentive” of the counselling offered by abortion clinics, claiming 60,000 of the annual 200,000 terminations would not take place if women were offered the chance for counselling elsewhere” (Guardian).

Nadine Dorries also said, “The important thing is that the government have highlighted and agreed that counselling by organisations that are paid to conduct the procedures is not independent […] That’s very reassuring.”

Similarly, Frank Field has said, “It is a general principle that advice and services should be separate,” […] I have no evidence of that [biased advice]. But we had no evidence of mis-selling of pensions until people investigated.” (Guardian).

The thing is that abortions are not the same as pensions (I think that qualifies as a sentence I never thought I would need to write). Abortions are healthcare, and with healthcare, the advice and services are generally not separate, and nor should they be. If a surgeon is going to be operating on me, I want her to be the one who talks me through the procedure and warns me of any risks. If a dentist is going to be pulling out one of my teeth, I want him, not an independent organisation (who is probably against the pulling of teeth) to give me the ‘facts’ beforehand.

The surgeon that did my last operation gave me all the facts I needed. I respected her opinion, and she knew the details of my case. These details can make a big difference to the advice you are given – if someone has diabetes, or heart disease, they might be given different surgical advice than someone without. If someone is taking certain medications, they need specific advice that pertains to their situation in advance of surgery. What we don’t need is to be directed to an organisation that is against the surgery ever taking place, who know nothing about our individual circumstances, who are thought to be in a better position to ‘advise’ because they will not be doing the procedure themselves.

In a healthcare context, learning from the misselling of pensions makes no sense at all. Many abortions are done in NHS hospitals – are they also thought to be profiting from women going ahead with a termination? Because if so, they also profit from people going ahead with verruca removal, chemotherapy and colonoscopies. Do we need independent organisations to advise us on those too?

[The image is a photograph of a pro-choice demonstration, at the front of which is a woman with a blue fabric banner, embroidered onto which is the words “Trust Women” in yellow. The photograph is by Debra Sweet and is used under a Creative Commons License]