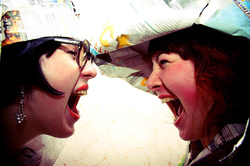 This is a guest post by Natalie Dzerins, who tweets as @thenatfantastic. It is an edited version of her blog post, Arguments I Will No Longer Have.

Certain arguments in comments on feminist blogs are as predictable as the rising of the sun, the passage of time, or Dorries being evil. I’m sick of explaining them repeatedly, so decided to compile a handy list:

Some things are such common knowledge that not everyone feels the need to link to them every time. For instance, Women are paid less than men. Arguments are not ruined by not referencing the obvious every time – you don’t need to link to evidence that water is wet.

Presenting a fact in a way you don’t like doesn’t make it not a fact. This post explains:

The tone argument – essentially “I’m more right because you weren’t nice about my being wrong” – is absurd and a means of derailing in the first place… Women are expected, socially, to not get angry. They are expected to remain calm and emotionally available at all times. Thus, when men use the tone argument on women they are essentially relying on patriarchal gender constructs to help them win an argument and to undermine that woman’s message. They are using their privilege to their advantage to silence women.

Possibly the most misused accusation on the internet. Ad hominem is a logical fallacy where an irrelevant personal characteristic is used to disregard an entire argument. For example, “You can’t talk about economics, because you don’t have a job” is an example of ad hominem. “You’re a mansplaining wanker, and here’s why you’re wrong…” is not. It is an insult, followed by an explanation. Oh, and “You use ad hominem, so I won’t listen to you talk about feminism!” is ad hominem.

Surely you know how “whatabouttehmenz?” arguments go by now, but here’s some examples:

a) Feminist writes about problem of female rape victims being disbelieved unless they are blonde nuns who have never even seen alcohol, were wearing a suit of armour at the time and have a signed confession from the rapist. A comment appears saying “but men get raped too!”. Yes – and this is obviously disgusting, but if they are brave enough to come forward, they’re not asked what they were wearing like it ever made a difference. That’s the problem we’re discussing. HINT: We know all rape is bad.

b) Feminist discusses problems of intimate partner violence (IPV). A comment appears saying “Men suffer IPV too, and they don’t have refuges so you’re all evil”. This type is particularly interesting, as what they are really saying is “I am aware of a problem, yet I refuse to do anything about it, and instead expect you to drop whatever you’re doing and FIX IT IMMEDIATELY”.

If these people are so concerned about men’s issues, why not fight for them themselves, instead of telling me I have to spend 50% of my time and energy doing it for them? These are the people who would rather close down women’s shelters than fight for men’s shelters.

5. “Well X isn’t a feminist and she doesn’t notice the things that piss you off”

Probably because she’s preconditioned by a patriarchal society to see things like street harrassment and rape culture as an expected inconvenience in her day to day life. If you asked her to think about the times she’d been treated badly because of her gender, chances are she’d come up with a few examples. Try it.

Newsflash: Just because she is a woman does not mean she is a feminist. It’s idiotic – “HEY LADIES. Michelle Bachmann wants you to be submissive to your husbands, take away your right to bodily autonomy and demonise you if you end up as a single mother, and you should totes support her, because she has a vagina!”. Just… NO.

Last time I checked, one feminist blogger calling someone out for being a misogynist didn’t stop them speaking. Here’s the deal – I defend to the death your right to free speech, but I also defend my right to call you out for being a dickhead. If you’re stopping me doing that, guess who’s denying who free speech?

[The image is a photograph of two women, wearing hats made out of newspapers. They are photographed side on, they are facing each other with their faces close together, and are both shouting. The photo is by Ian Quantis and is used under a Creative Commons License]