The “choice” that is everybody else’s business 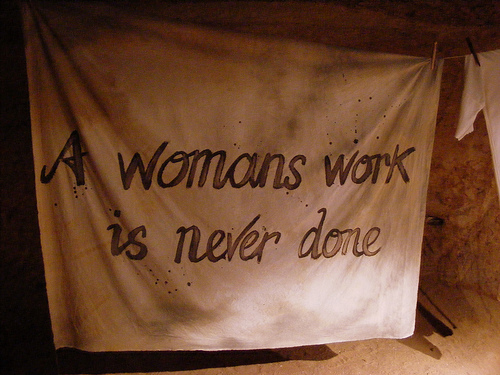 A guest post from Katie Gardner about a tellingly old-fashioned question during a recent debate on a BBC TV programme.

Why was the question ‘Should women stay at home with their kids?’ even considered, and actualized, on BBC’s Sunday Morning Live today?

I feel confident that this question was aimed to get a rise out of the debaters, and as well to appease the audience, but at what cost? It is detrimental to feminism to even bring this question up on a credible news channel like the BBC. Of all the remarks that made me want to reach through the television set and remove various commentators, the one that really resonated with me was that women have a choice, and that is what is important. Wasn’t it decided that women had a choice a long, long time ago? Like when women got the right to vote? Or when they entered the workforce? Or when they exceeded in all fields that were once seen as only fit for men? Why are we focusing on the positive nature of ‘women have a choice’ when it comes to asking whether or not they should stay at home with their kids? Of course women have a choice. What women do not have a choice in is the societal ‘norms’ and structures that can at times present enormous obstacles to their success, and can put pressure on them to stay at home not out of choice, but out of ‘what is good and right for the family’ –an entirely socially constructed notion.

Also, why are conservatives so quick to chastise the stay-at-home, single, working class mum and at the same time uphold the 1950’s housewife ideals of women’s place being solely in the home? These ideas are not mutually exclusive. Many women who have this illusive ‘choice’ are also coming from privileged lives and incomes that allow them to do as they so choose. Working class mums may not have any choice in the matter, and may be forced to enter work because the government is not providing sufficient help for nursery care. There are many, many different styles of parenting and a multitude of factors that dictate whether one chooses to stay at home or not, but the fact that it is ‘a choice that women can make’ has no place in the discussion.

As a woman, it is infantilizing for people on the show to act as if this choice is some new and exciting revelation, one that can empower. No, it disempowers.

Katie Gardner is originally from the United States, but has lived in the UK for many years. She was part of a feminist group at university in Portland, Oregon, and has been involved in campaigns and protests concerning feminist causes. By day, she is training to be a Speech and Language Therapist at City University in London and by night she is a knitter, a bad chef, a reader and a lover of cats and dogs. In her spare time, she tries to see as many films as possible without completely obliterating her monthly budget. She also likes to take walks and have long chats with cups of tea with her partner, Ed.

Brown/black and white picture of a hanging sheet with the words “A woman’s work is never done” written on it by Jo Jakeman, shared under a creative commons licence.