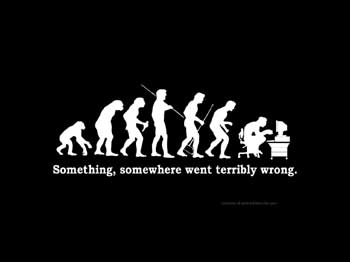 I’m going to repeat it again until you’re tired of hearing me say it. I’ve already said it here, here, and here. Evolutionary Psychology tries to make connections between evolution and human behaviour. As a past neuroscientist and a past psychology student, evolutionary psychology does not uphold to scientific rigor. In the mean time, they make grand sweeping statements like “Domestic violence gets evolutionary explanation” at the New Scientist.

To sum up the article, David Buss from the University of Texas argues that violent men are simply trying to make sure their partner has their child and not another man’s. They suggested several studies have supported this link. They refer to two examples;

“For instance, a small study of 65 pregnant women in North Carolina found that those whose partners attacked them were more likely to be carrying another man’s child (Journal of Family Violence, vol 19, p 201). Another study involved quizzing 8000 women in Canada about their partners. Some 14 per cent of those with a history of domestic violence agreed that their partner “is jealous and doesn’t want you to talk to other men” – less than 1 per cent of women who experienced no violence agreed with the statement (Current Directions in Psychological Science, vol 5, p 2).”

First, let’s break down the two studies the author decided to cite.

The first study cited that women who were attacked were more likely to be carrying another man’s child. This does not prove that men are evolutionary prone to violence to ensure that their baby has their genetic material. I can easily make a different conclusion that women are more likely to be carrying another man’s child than the violent man because she does not feel confident in having a violent’s man’s baby. In fact, I could probably make an evolutionary argument that violent men have violent children, therefore I would evolutionary choose not to have violent men’s babies.

The article actually does not prove the point that domestic violence is evolutionary motivated. In order to prove that domestic violence is evolutionary motivated, we would actually need to a) find the genetic code that codes for domestic violence and then b) see if there is a correlation to the genetic code to actual occurrence of men being violent towards their female partners. Here’s the problem: geneticists have not in any way found any behaviour traits linked to genetics. They have linked diseases, and body functions to genetics but not behaviour. That’s because the link between genetics and behaviour are extremely far apart. There are many factors which affect the genetic material and who we are in our environment which determines our behaviour. Further! to determine the evolutionary link between genetics and behaviour is one extra step which cannot be predicted.

Therefore, we cannot make correlations between evolution and domestic violence.

However, this isn’t the first time I’ve written about evolutionary psychology, evolutionary behaviour, or biological determinism. So tonight I did a little bit of digging to figure out why. At the bottom of the New Scientist article, it gave the link to David Buss’ academic article. If you do a little bit of google search you can actually access the article for free on his website. “The evolution of intimate partner violence” was published in the academic journal Aggression and Violent Behaviour. It is published on Elsevier, which is like a search engine for all the academic journals in the world. Elsevier is a highly reputable organisation.

When you do a little bit of digging, David Buss is a highly regarded academic. He’s been on the Time’s magazine citing why older women are more sexually active. He is highly regarded at the University of Texas. This shocks me as I had always thought the academic community was based on critical thinking. When a male student sued the LSE Gender Institute for being sexist, my original thought was the LSE Gender Institute has a system to ensure that they are accountable to critical thinking and it would be absurd to out-gender-theorized the gender theory capital. Perhaps I hadn’t given Evolutionary Psychology enough of a chance? I started pouring over David Buss’ article looking for some semblance of critical analysis.

I have to admit, it is a well written academic article but I had some major problems with it. Here’s an excerpt:

This quote is based on the parental investment theory as noted in Wikipedia. It predicts different mating strategies between men and women. For example, women will be extremely choosy as they have a greater investment in the offspring and men will not be so choosy. Or the old adage that men only want to fertilize and ensure the procreation of their offspring.

But if you follow the quote’s analysis, it determines that there is a great benefit to monogamous relationships, they require alot of investment, and thus they are extremely rare. Monogamy only characterizes 3-5% of the mammalian species. But why does the analysis follow the line of thought which focuses on reproduction and monogamy? You could also argue that as monogamy has such high costs and it is so rare in the mammalian species that the human species is abnormal to be pushing monogamy on couples. Society should not push monogamy and we should let human species do as they are evolutionary naturally to do so which is not monogamous.

Luckily, at the bottom of the Wiki article cited criticisms of Evolutionary Psychology. First, Evolutionary Psychology is operating under naturalistic fallacy meaning they are mixing the nature vs nuture debate. The “nature versus nurture debate” demonstrates that scientist don’t know where the line is drawn between when genetics starts or when the environment ends when determining behaviour patterns. Secondly, evolutionary psychology is genetically reductionist and genetically deterministic illustrating it does not address the complex interaction between genes and behaviour (as I mentioned above). Lastly, Evolutionary Psychology does not pass the age old scientific measuring stick of “measurability of hypothesis”. Remember back in grade school when our science teacher gave us the Methodology of Science? A testable hypothesis has to be measurable, so that someone else can replicate the exact same experiment with the original notes. You cannot replicate Evolutionary Psychology therefore it fails the methodologies of science.

Further, when reading more about the criticisms of Evolutionary Psychology, there are many books written critiquing the scientific nature of evolutionary psychology. Everywhere from philosophers of science, geneticists, psychologists, neurologists, behavioural anthropologists, and social anthropologists. In fact it’s the wide range of criticism which comforts me and reassures me that despite Evolutionary Psychology is an academic field, it is being criticized from other angles.

So overall, while Evolutionary Psychology has more academic support than I’m comfortable with it demonstrates that not all academic communities are as rigorous or as critical as I’d like. It shows that we need to be critical of everything we read as different institutions can have gender biases.