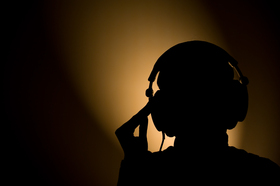 I listen to lots of podcasts, on all sorts of subjects, but sometimes struggle to find really good feminist ones. So I asked on twitter and facebook for feminist podcast recommendations.

Some of the following were already on my list, and I will be adding the others to give them a try. In case you, too, were looking for some feminism on your iPod (other mp3 players are available), check these podcasts out. Some of them are not explicitly feminist, or do not call themselves feminist, but they are ones which are considered feminist by at least some listeners. They are in no particular order.

We have also had our very own podcast in the past, and you can check out episodes one, two and three.

Other podcasts I found through google search rather than anyone’s recommendation, are:

Thanks to @famousblue, @AngryMalayWoman and @LittleSpy amongst others for their recommendations. If you know of any other feminist podcasts, let us know in the comments!

[The image is a photograph of a silhouetted person wearing headphones, against a dark gold background. It was taken by Philippe Put and is used under a Creative Commons Licence]