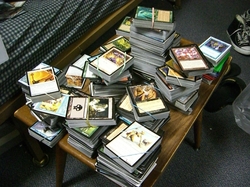 Geordie Tait’s open letter to his future daughter: the story of Alyssa Bereznak and the misogyny of the gaming community.

I am a self-described geek and use to be a gamer. My brother and I use to have Warcraft inside jokes using character’s phrases and inserting them appropriately in our lives. “Ready to work” from the Warcraft’s peasants still sends me into fits of giggles. I admit as a geek I enjoyed being part of a community where gaming was a common bond.

However, I left the gaming community for a three reasons. A) I just couldn’t keep devoting so much of my time to an addicting game B) the first person games made me nauseous C) I was tired of watching women characters dressed in a hypersexualized state. Fighting zombies, ghosts and wizards in heels just no longer seemed convincing.

Which is why I welcomed Geordie Tait‘s column on the misogyny of the gaming industry. Geordie Tait is a columnist at Starcitygames.com, one of the most popular gaming magazines. I want to talk about how he ripped apart the gaming community and all their sexist antics.

It centers around Alyssa Bereznak and her blind date with Jon Finkel. Jon Finkel is a World Champion Player of Magic:the Gathering, a classic card game with magic and wizards. But after getting to know him she realised she didn’t want to be dating a gamer, and wrote a quick article for Gizmodo as Jon Finkel is sort of a celebrity. What resulted was a surge of sexist hate messages aimed at Alyssa as a result of her turning down a local hero of the gaming community. Jon Finkel, on the other hand has been very mature about his responses to the public.

Geordie thus writes this article shaming the gaming community of unfriendly environment for women. What is great about Geordie’s article is it uses Alyssa’s experience as a basis for pointing out the misogyny in the gaming community. It’s long but thorough. So I thought I’d just give you a breakdown of my favourite parts. Here’s what I loved about the article.

1) He points out how the tech industry is amongst the most male-dominated and sexist in America. Bonus points for the dig at Scott Adams.

“[Alyssa’s article] was written for Gizmodo, a tech website. The tech industry is among the most male-dominated and sexist in America. The stories of conference organizers begrudgingly booking female speakers and then grumbling about “affirmative action” are legion. Scott Adams is celebrated as the sharp-witted visionary behind “Dilbert,” darling of office bulletin boards, and yet he continues to make stupid statements about women on a regular basis. Without condoning the response, I really don’t know what this article was doing on Gizmodo”

Considering the gaming community often values often synonymous to the geek community. Namely inclusiveness, and not judging people by their appearances. This was an example where the gaming community were not following these beliefs as they characterized her as shallow and made several sexist remarks about her looks. 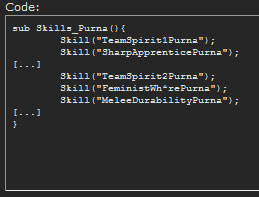 3) He brought in examples of where he’s personally seen anti-woman gaming attitudes.

“Every day, some new evidence of anti-woman gaming attitudes would float to the surface of the industry like a dead body. In the middle of writing this section, in fact, it was pointed out to me that one of the programmers coding Dead Island used “FeministWhore” as the placeholder name for a female character’s ability and then skillfully left it in the debug code for all gamers to discover.”

4) He skilfully points out the ruse of the Nice Guy™ defence amongst the gaming community.

“The idea that gamers are the gentle lambs of the dating pool, neglected by females who gravitate toward wolves who will devour them whole, is a gamer bromide from way back. It is personified in the Nice Guy™ Gamer, one of our number who considers himself an ideal romantic partner because of his ability to offer emotional support under false pretenses, characterizes friendships that don’t lead to sex as “failures,” demonizes extroverts, and awards himself gold stars for not hitting women or raping them.”

5) AND pops the proverbial bubble that gamers feel they are superior than the average male population and thus don’t feel feminist theory applies to them.

“Don’t be fooled, kiddo. Gamers are not a cringing minority but the same scornful, entitled males you’ve been dealing with your entire life. And this particular breed–fancying themselves unappreciated, intelligent, and more worthy than other males of female attention–is in no mood for rejection. Despite their pretention to a higher morality when it comes to women, they will repay rejection with cruelty and scorn.”

6) Lastly, I enjoyed his description of feminism.

“Resist the belief that you know everything about the issue already. Feminism is an actual field of study. As with any field of study, it should be entered with an absence of preconceptions. If a woman has strong feelings about women’s issues, it doesn’t mean she spends all of her time sharpening her castration tools. Talk to women about what’s important to them. As you learn more, you’ll understand more, in the same way that a budding engineer might gradually grow to understand a complex blueprint. If your first instinct when you hear the word “feminist” is to say “those man-haters want equality, but they still want me to pay for everything, hurf durf!” then you currently have as accurate an understanding of feminism as a confectioner would have of a Titan II missile schematic. You know those congressmen who say that Grand Theft Auto IV is a “crime simulator” that is “training new felons?” That’s you, and feminism.”

While there are many more favourite parts of his article, I’ll leave the rest of it for you to read.