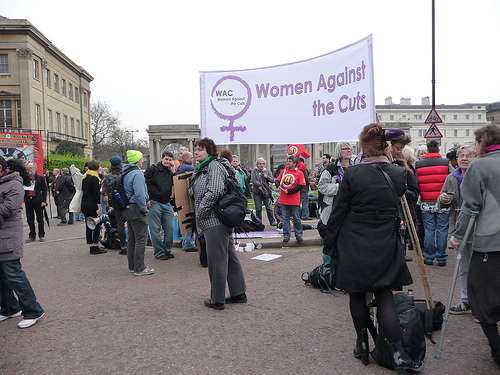 Too much glee? Are the cuts only about the economy?

Does this government have it in for women and other minorities? Official line, of course, is not – though as a woman with much cause to be cynical once very cynically put it: “they would say that, wouldn’t they”.

There are, of course, already some pretty big signs that the cuts that have scarcely even begun to bite will affect women disproportionately. A range of economic experts, from Labour’s Yvette Cooper, to the TUC, to the BBC’s own Mark Easton all tell much the same story.

Women have benefitted over the last few years from the growth in public sector jobs both because these are focussed more in the caring professions (which formalise the employment of women in traditional roles) and because they were billed, up front, as “family friendly”. Unravel the public sector and of course women will on average feel the pain harder, faster than their male counterparts.

And the pain is there at both ends, as many of the services being cut back or taken away remove things on which many women who are not employed by the public sector have also come to rely on – from child and respite care through to delivery of health services

But is this about targeting women? Or is it, as some economists would argue, a failure on the part of many women to break out of the public sector enclave. After all, in some previous recessions, it has been manufacturing that has suffered, with the effect of cuts and economic shrinkage hitting men harder, at least when it comes to jobs.

The same argument is rehearsed in respect of other cutbacks. Let’s not survey how the LGBT community use services: that’s just “political correctness gone mad”; and supposedly pointless too, in terms of any real change it might make. Or let’s “enable” family members to care for their relatives: after all, they can do it so much more personally.

Personally, yes: and also cloyingly, manipulatively and in ways that not inevitably, but often, can destroy the dignity of the person being cared for. As one individual who employs a personal assistant from her care package put it to me: “if I need something done, I ask. There is never an issue of the assistant turning my needs back on me. Forcing me to beg. Or simply deciding they know better than I what I want”.

And with the best will in the world, that happens with family.

Still, still, still…yes, I can see how this might be presented as a sort of economic “last in, first out” thing. The economy needs some re-adjustment and though you may argue til the cows come home for greater taxation and more redistribution, you just know that a conservative administration will cut public spending first. And if minorities are disproportionately dependent on social systems that is just tough. Isn’t it?

Of course, you know I’m going to say: no! First because, as with Greece, there is a strong argument for looking at the whole and not just the parts. If you take away hope from some sections of the community and put in its place despair, you store up trouble for the future. That’s both the obvious, on the street sort of trouble, and the more invisible damage to the social weave.

Second, though…and it is hard to put a finger on, but its there: I do scent a sort of muffled glee. A sense of “Oh, dear: we have to cut back on toys for women and gays and the disabled and we’re not enjoying it at all. Oh no: not one bit”. Except that far too many are.

It is tragic that cuts need to happen now: even more so that the way they interact structurally with society causes damage to fall unequally. But unforgiveable that some sections of those now cutting probably quite like that fact.

Picture of TUC March for an Alternative to cuts (26th March 2011), Hyde Park. By tomylees, shared under a creative commons licence.