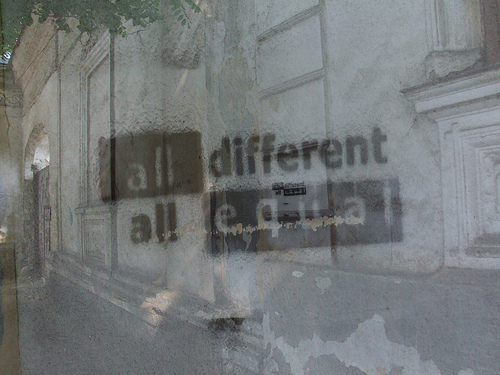 Who needs another minority?

Minority rights are under attack as never before – mostly under cover of George Osborne’s grand “let’s save the economy project”. Those with privilege and agenda are looking to roll back as many of the hard won gains of the last fifty years as they can.

So this might not be an ideal time to raise the issue of how we treat a wider range of minorities, especially groups not even recognised formally as such by the political classes, and who consequently have no legal protections whatsoever. But I’ll take my chances: rights are not something to be bargained over, especially where their absence is leading to serious abuse and injustice.

Chances are you have some broad sense of what is meant by intersex. Historically, you would be categorised as such when you have “clearly ambiguous genitals”. This, in turn, may be because your genetic/chromosomal make-up does not match either of the two simple groupings – XY or XX – used by biologists to assign gender, or due to epigenetic factors such as pollution, radiation, or hormone levels in the womb during gestation.

Simpler is to say that intersex people have external sexual characteristics or internal reproductive systems that differ from what is usually expected of either men or women. More broadly, the Organisation Internationale des Intersexes (OII) argue that intersex includes anyone who is “of intermediate sex, somewhere between standard male or female or not having a body that meets the norms for “standard” male or female”.

So, beyond adding yet another letter to the ever-increasing rainbow family that now becomes LGBTI, does it matter? Unfortunately, yes.

First, because the medical profession has traditionally seen intersex people as problematic: as “deficient” members of the two “proper” genders, as opposed to individuals in their own right. Therefore they have not counted. Quite literally: there are no reliable estimates for the world’s possibly quite large intersex population because most medical professionals have defined the group away, and do not record intersex at birth.

That has a serious knock-on effect of its own: because some genetic conditions that create intersex also come with illness, or predisposition to illness. And not identifying someone as intersex may frequently mean not treating them until they become very ill indeed.

Or, since most medical authorities simply don’t recognize intersex, the only way to obtain access to sometimes life-saving hormonal treatments is through self-medication or lying: in Australia, for instance, the main legitimate route for an intersex individual to obtain hormone treatment is by self-declaring as a “potential sex offender”.

Second, as “deficient” men or women, the medical profession has a long history of mis-treating those who are intersex, through interventions designed to “(hetero)normalize” their body and their psyche.

Last, but by no means least, without recognition, intersex individuals are frequently subject to a level of abuse and discrimination – not just in the UK, but across the globe, that would have anyone who identifies as LGBT instantly in court with the full backing of the Equality Commission.

In 2004, when offered the chance to begin the slow process of providing some legislative protection to those who are intersex, alongside those who are trans, UK politicians ducked.

In a week that saw the world’s first ever International Intersex Forum take place in Brussels, it is to be hoped that government will not wait another 6 years before it thinks again.

Picture of graffiti in Chisinau, containing the words “all different all equal”, by bagriton. Shared under a creative commons licence.