This is a guest post by Vicky Brewster. Vicky is an accountant, occasional writer and cat obsessive from Swansea.

What began as a simple grumble by those who commonly use the #diversityaudit hashtag on Twitter has turned into a stormy debate with television comedy show Mock the Week. Viewers are complaining that women are under-represented on the show, while the programme’s twitter feed argue that there are more male comedians than female, and women are well represented.

The first point is, what counts as proportional representation? I’m sure we’d all love to see a perfect fifty/fifty split on panel shows, but that’s just not practical where women make up a smaller percentage of the comedy circuit than men. Mock the Week claim that only 18% of live comedians are women (their figures obtained from www.chortle.com – I made it 19%, but we won’t split hairs). However, the website includes several faces that we’re very unlikely to see on a Brit panel show any time soon, and also fails to include British stalwart comedians such as Victoria Wood. So, I went hunting for my own figures! I surveyed nine British panel shows for all their participants in the most recent complete series, then filtered the results to show only those who class themselves as ‘comedians’. My results showed that women made up 25% of this list – quite a difference. (NB – these names available on request, but all information gathered from public domain sources.) 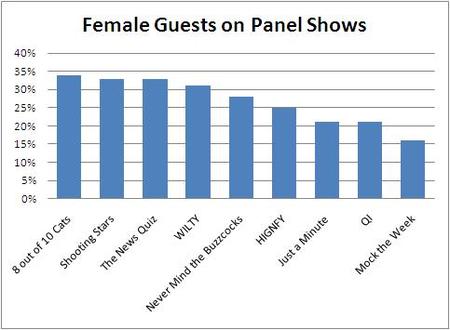 So how does Mock the Week fare alongside either of these figures? Series 10, which is still in full swing, comprises 16% female guests. I put this to the Mock the Week twitter feed, and was told that I can’t generalise statistics from one series. So I looked back further. Series 9, 13%. Series 8, 20%. Still pretty damning. From its inception (not including Christmas or Charity specials) the programme averages 22% female inclusion. However, a glance at the graph shows that this is more because of the regular appearances of women when the show was new, than any consistent effort to maintain proportional representation. In fact, during the first and second series there was a woman in every single show. This does not happen again in the rest of the programme’s running. In eight out of the ten series, you will always find at least one episode without a single female face. 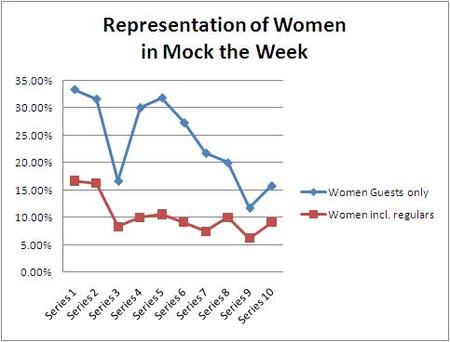 This is perhaps a good moment to point out that these figures only take into account guests on the show, and not the programme’s exclusively male list of regulars. When these are counted into the equation, there is a very distinct and worrying bias.

Some might agree with Mock the Week, that the comedy circuit is a boys’ network and it’s unfair to expect them to include more women at the expense of men who might be more talented. Answering questions around this matter, Ava Vidal has said, “For people asking if I think [Mock the Week] is a boys’ club then yes I do. Pretty much like the whole comedy circuit is in general,” and then added, “To people suggesting an all female [Mock the Week] I wouldn’t argue for that-ever! Can you imagine if the ratings slipped? We’d be crucified!!”

So in an effort to better understand why Mock the Week has been so singled out, I did a survey of other similar panel shows. Mock the Week came last. There will be a defence that it is the only panel show that chooses its guests purely from the world of live comedy. However, consider the other professions from which these shows might pick – politics, journalism, performed comedy. They are all male dominated. And while this is a limited sample study, there is a definite deficit, right now, in the number of women Mock the Week is supporting. I say supporting because I think Mock the Week is a wonderful platform to bring new comedians to television. Several of its former guests and regulars have since gone on to have their own shows. This is why it’s so important that their producers take note of this debate. 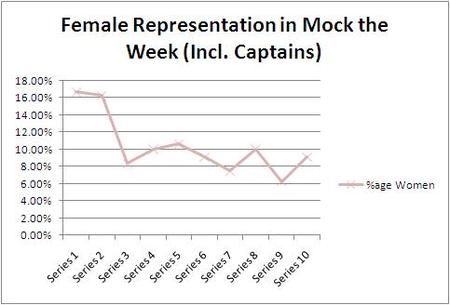 These are the facts. Mock the Week has under-represented women, by my figures, for the last four series, in contrast to their competitors. When taking regular panellists into account, they always have, by their own figures. They say that they don’t want to take part in ‘positive discrimination’, and have made no indication that they intend to take the complaints of their fans seriously. In doing so, they are enabling the existing boys’ club, and are actively limiting the number of women who could go on to have glittering careers. British comedy (and especially ‘minorities’ in British comedy) need Mock the Week to look at the cold hard facts, and re-think the way they are doing things.

Note from Philippa: I approached Mock the Week about writing a response for us on this blog, but they declined.

[The image is of Dara O’Briain in the centre, and four other comedians who have been regulars on Mock the Week behind him. All five are white men. The photograph is from the BBC press office]