Is Tom Martin’s lawsuit against the London School of Economics for ‘anti-male bias’ a genuine complaint (however eyeroll-worthy and misguided)? Or an attack on feminism from a misogynist in progressive clothing? The evidence I have points to the latter.

In February 2010, I answered an online ad for a new website exploring gender issues and sexism. I emailed my CV and a few writing samples over to the listed contact and waited to hear back. Finally, three months later in May, I received an email from Tom Martin who said my application had been viewed favourably. He asked me to complete a writing exercise, which I did, and again gave positive feedback. It was only then that he outlined what the website and project were about, which was classed as ‘comedy’ and entailed a group of writers creating the ‘Missing Minister for Men – the world’s number 1 men’s rights activist’.

Martin went on to explain that “a man” was looking to bring a lawsuit against a “major university in London” for “anti-male rhetoric”, never mentioning that the man in question was him. The group would be expected to write for the website and also campaign around university campuses to garner support and gain media coverage. The group would split any resulting “earnings and royalties”.

Though Martin claims to be pro-feminist, progressive and anti-misogyny (among other self-descriptions), a look at the Ministry for Men’s Twitter account reveals precisely the opposite. 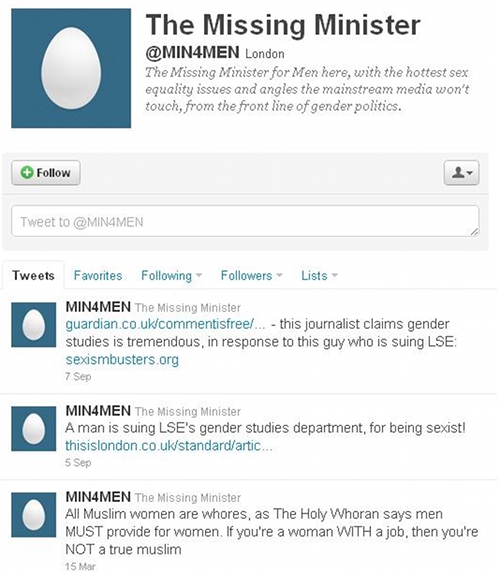 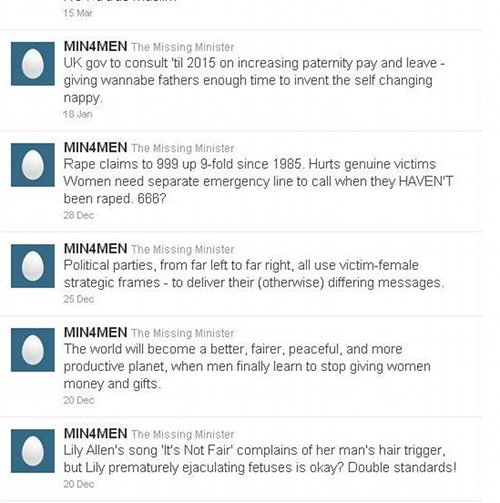 It is noteworthy to me that Martin remained on his gender studies degree for only six weeks before quitting and lodging a complaint about the supposed anti-male bias in the curriculum and, as far as I’m aware, did not go on to enrol in a different course. It is also worth noting that he only launched his ‘Ministry for Missing Men’ campaign after he had received a refund from LSE in January 2010.

Martin’s antics stink of a publicity stunt designed to paint him as the innocent, caring, liberal-minded bloke taken hostage by a feminised, man-hating world, in a strange bid to bolster his comedic aspirations. Whether those aspirations affect the outcome of his lawsuit remains to be seen.