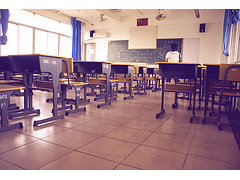 Schoolgirl bullied by cis classmates and their parents

Both yesterday’s Worcester News and today’s Metro carry reasonably well-balanced reports of a girl, medically diagnosed as gender dysphoric during the summer, who has returned to her new school year with a gender-appropriate presentation.

To be honest, I’m not really interested in raking over the ashes of the ‘nature vs. nurture’ argument, nor whether the child is single-handedly upholding patriarchy by dint of being binary-identified, nor am I interested in reopening the debate around puberty-blocking medication.

What does bother me is the way in which the child has been subjected to transphobic bullying:

[Her mother] also said her daughter, who would dress as a girl in school holidays, received abuse during the summer break when she went to buy orange juice and milk from the shop and returned crying when an adult called her a freak.

Her mum said: “She returned and said, ‘Mum, I can’t even go to the shop’. We went to a performance at the school and my daughter went as herself.

Her mum said there had been some bullying from the children, verbal and physical, but that many children had accepted her and it was adults who had given her abuse. [Via]

Compare that with this quote from the Metro:

Michelle Bridgman, a psychotherapist and project manager for the Gender Trust charity, described the child’s bullies as ‘barbaric’.

‘What it comes from is total ignorance around the subject,’ she said. [Via]

I can only agree with Michelle Bridgman. In this day and age it’s deeply distressing that there are still adults who not only hold transphobic views but whose children also seem to think such hate speech is acceptable, despite the child being supported by the school as well as her own parents. It’s a sad fact that as long as these opinions remain unchallenged by other people (cis and trans) then the day that we’re accepted as the full and equal members of the human race that we are, remains a distant hope. And as for those cis parents who have complained about what they say is a lack of consultation [Via], well, if that doesn’t demonstrate what we mean when we use terms like ‘ciscentric sense of privileged entitlement’, then I don’t know what does.