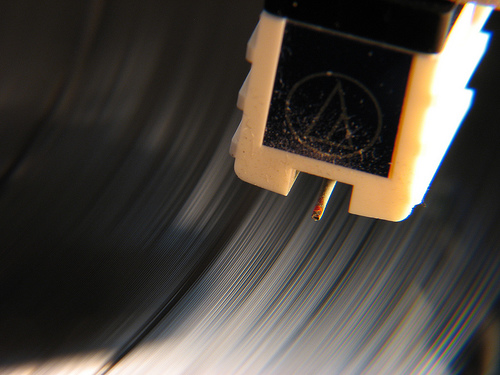 Welcome to the fourth F-Word playlist! It features a selection of both new and old stuff I’ve been listening to lately and starts off at a slower tempo, with a track from *PJ Harvey’s recently released iTunes Session. It then gradually moves through more jazz-tinged sounds from various genres and a touch of 90’s indie before settling into a more electronica set. This final section kicks off with a Nic Endo remix of The Raveonettes’ Ali Walk With Me, followed by something from the forthcoming album from Billie Ray Martin’s project, The Opiates. (Watch out for my review coming soon!)

Also included are an older Aeroplane mix of Williams Blood by the formidable Grace Jones (I couldn’t get along with this month’s album of remixes but you can see what you think here), a reworking of Paula Knight’s Forbidden from Arthur Loves Plastic (apologies to those who prefer Bev Stanton’s more downtempo stuff!) and Roisin Murphy’s Momma’s Place. I picked up the more recent Cherry Picking (by Toddla T and featuring Roisin) on red vinyl a few weeks ago but couldn’t resist including Momma’s Place instead, as it’s actually Roisin’s most recent solo effort and I’m hoping it will be included on her next album.

After this, you’ll find another Shortee tune (this time with her DJ partner Faust), along with something that captured the attention of both Cazz and myself: the latest single from SBTRKT, featuring Roses Gabor.

Another discovery I made this month (admittedly almost a year and a half late!) was this rather lovely Passion Pit remix of Tegan and Sara’s Alligator.

The playlist’s penultimate track is taken from M83’s forthcoming album Hurry Up We’re Dreaming. This double album has been in the making for almost three years and descriptions suggest it’s going to continue in the electronic vein of Saturdays = Youth rather than the group’s earlier more shoegazing indie.

The last track in the Spotify playlist is Karen Finley‘s Tales of Taboo. I expect some of you will be familiar with her work but, if you aren’t, she’s a feminist performance artist who was involved in some great electro in the 80s and performed very gritty and sexually explicit monologues that were deemed “obscene” at the time. (The sexually explicit content means this one is not suitable for most workplaces so you might want to stop the playlist before it gets to that one if you’re listening at work and check out this instrumental instead!)

Finally, today’s bonus track not available on Spotify goes back to where Sade’s Maureen left off and explores a friendship between two women:

The Amy Winehouse song presents a more turbulent friendship than the more warm and straightforward one Sade refers to but I think it goes to show that -as with Valerie and Cherry– Amy was very good at capturing the essence of female characters in the songs she sang (albeit with the latter song actually being about a guitar!).

Close-up picture of a needle on vinyl by Great Beyond, shared under a creative commons licence.