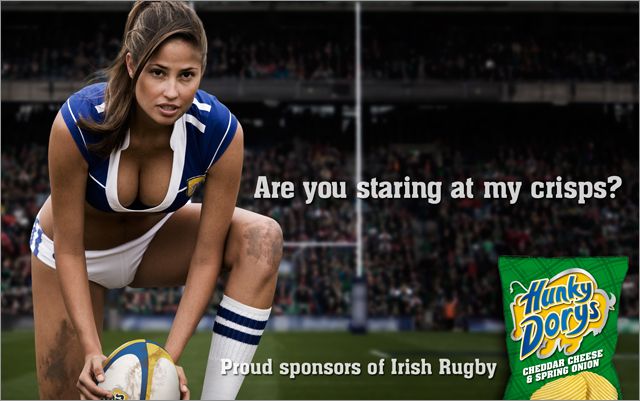 The advertising industry is what made me become a feminist blogger, and at that time I was delighted to find a whole conversation online challenging the sexual objectification that advertisers seem obsessed with. I’m sure many of us here at The F-Word are familiar with the online complaint form of the Advertising Standards Authority, usually a futile waste of eloquent feminist argument. While it is true that some of their decisions do appear to show awareness that adverts have a major impact on gender inequality, for the most part, relying on this self-regulatory body to raise the standards when it comes to sexism and sexual objectification is becoming increasingly frustrating.

I’ll give you a perfect example of the complete absurdity of the process from the ASAI, the equivalent authority in Ireland. In April 2010 a company called Largo Foods launched an advertising campaign for their ‘Hunky Dorys‘ crisps, a product marketed in a similar way to ‘McCoys’ – dripping with macho-manly-man nonsense. Largo decided to take a lads’ mag style approach to this campaign which seemed to be based on the premise that ‘boys will buy our product if we let them look at boobs’. Hence they came up with this gem:

There was a media frenzy with all news media in both North and South reporting the widespread outrage. Feminist bloggers went ballistic, activists defaced billboards at every opportunity and even the National Women’s Council of Ireland took time out from working on important things like political representation and dealing with the legacy of the conflict to say that they did not approve. And the public found their voice as a record 300 people took time to complain to the ASAI, who responded by waiving their usual tedious investigatory process and issuing an immediate ban that prohibited the use of the ads in any form, including on the Hunky Dorys website. Hooray! An obvious success, tempered only by the jibes of those who wanted to gloat that the public debate had probably served only to increase awareness and therefore sales of the crisps. While that may have been one outcome, it does not negate the other more important outcome which is an increased public awareness that a feminist critique of this representation of women even exists, and happens to be pretty popular. Overall, I was happy with how we took on the patriarchy and scored a small victory.

Which is why my heart sank when I heard from a journalist friend that Largo have lunched a new campaign with what appear to be the exact same ads! Only the costumes and the shape of the ball have changed since this version of the campaign features models pretending to play gaelic football rather than rugby, thereby insulting even more women in sport. Can there really be a loophole so gaping in the industry’s code of practice that a company can release such an obvious copy of a banned ad and get away with it? 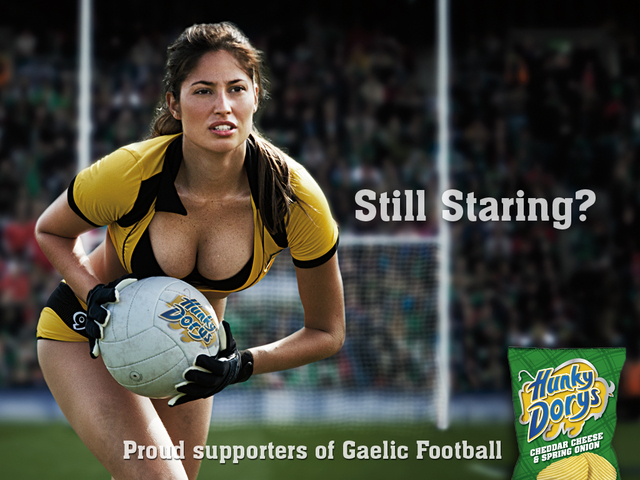 The scandal at News International this year has sparked a much needed debate about the effectiveness of self-regulation of the press but for me, a similar debate about the regulation of the advertising industry is long overdue. In the UK, while the ASA are officially an independent body, they exist within a system of self-regulation that is fully funded by the industry itself and ‘is based on an agreement between advertisers, agencies and the media owners that each will act in support of the highest standards in advertising, to ensure that all ads are legal, decent, honest and truthful.’ Made up of members from each of these stakeholders, the Committee of Advertising Practice who set the rules for this often dirty game have a mandate to ensure ethical practice and be aware of the cultural impact of dangerous or discriminatory messages in ads. However, it’s increasingly evident that they often deprioritise this mandate in favour of allowing advertisers to make gains on the back of controversial and offensive materials. Unless we want to have to fight the same battles over and over again, a more robust approach to accountability must be found.

The current system actively encourages offensive material as the publicity it draws often outweighs any brand damage, particularly if the brand is marketed towards a young male demographic. A representative from Largo foods commented in the press this week that, as a medium-sized Irish company, “we have to attract attention one way or other”. I for one am sick of the arrogance of lazy advertisers who want to degrade women and then wait for feminists to react and do their job for them.

First image (“Are you staring at my crisps?”) via Scary Ideas. Second image (“Still Staring?”) via Adrants.