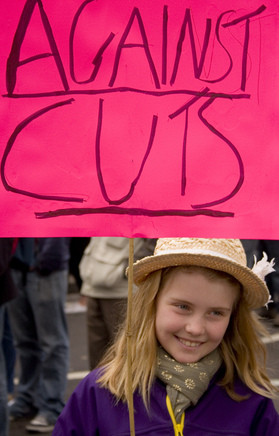 This is a guest post by Mary Tracy. Mary has been trying to write for The F-Word for 5 years now. She has finally done it, and no one is more surprised than her. She blogs about feminism and politics from creative and original angles in her blog.

You have probably heard all about Downing Street’s super secret plan to “win back the women”, detailed in a leaked government memo last week. It seems to have dawned on a few politicos that anti-women policies don’t go down well with women.

First of all, I would like to get something off my chest with regards to the idea of “offering” things to women in order to “win them back”.

Two days after the secret memo was revealed, Charlotte Vere appeared on Newsnight reporting on the story. She went on to defend the cuts to public services by saying,

“Women have come out poorly from the cuts but that is not because they are women, it is because we have to make the cuts. And women represent the sort of jobs that actually are being cut. That is the complex issue: why are women in those jobs; not that they are being cut.”

Gavin Esler, the presenter, was only too happy to emphasize Vere’s argument, saying,

The trouble is that this argument seems to make sense. The government is not actually targeting women, but public sector jobs. Seen from this angle, the fact that women will fare worse than men as a result of the cuts appears to be an unfortunate coincidence.

But is there a reason why women are twice as likely as men to work in the public sector? The answer is yes, and we have to understand this if we want to frame the government’s cuts as an attack on women.

Jobs in the public sector offer women secure work, what remains of the old idea of “a job for life”. And its working patterns tend to be more flexible, which is essential for women, who have to bear the brunt of managing both paid employment and family life.

While all of that is true, it doesn’t quite explain why more women than men hold public sector jobs.

The real reason, in a nutshell, is this: it is within the public sector that we find the jobs designed to “care” for people. And as feminists know too well, it is women who are socialised, from birth, to care for others.

But Conservatives don’t believe that the state should care for people. They argue that if you need care, you should pay for it. And if you can’t, then tough luck. But above that, they believe that women are supposed to do the caring, but shouldn’t be paid to do it, much less by the state.

I can prove this to you by going through some of the “offers” the government is eager to tempt women with: cutting school summer holidays, banning advertising aimed at children, frontloading child benefit. Why should any of this tempt women?

What the government is tacitly admitting is that women care about children so much they are willing to change who they vote for. However, by cutting services like Sure Start Centres, the government is also telling women “don’t expect to get any help from the state when caring for children”.

If women are going to be the carers in society (nobody is arguing that they should, but at the moment, they bloody well are), then any attack on the “caring” services will be an attack on women. It is that simple.

[The image is a photograph of a young blonde girl wearing a straw hat and purple coat. She is smiling and holding a bright pink handmade sign which reads “Against Cuts”. It is by Dominic Alves and is used under a Creative Commons Licence]