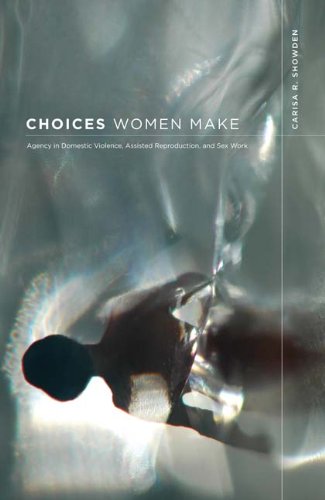 The press release of Choices Women Make: Agency in Domestic Violence, Assisted Reproduction, and Sex Work states that Carisa R. Showden’s understanding of women’s agency ultimately leads her to review possible policy and legal interventions that could improve the conditions within which agency develops – and which could positively enhance women’s abilities to increase and exercise their political and personal options.

In this review agency refers to an individual’s freedom to act. In order to have agency you need to be free from constraints which would prevent or restrict your ability to act. You also need a social or political environment in which you can act freely, the means to live and the knowledge to ensure rational action.

For me personally, the most striking feature, before discussing any of the content, is that the style of the author is very academic and at times this made me want to skip some sections. When reading non-fiction like this I always feel that it’s a shame when interesting messages get lost in over-academic language. I can only assume that Showden’s target audience is fellow academics – which is rather more often than not the case with studies like these – but considering the title and content maybe her message would benefit a wider audience. The women discussed in the book, the survivors of domestic violence, women using assisted reproduction and women in prostitution, will probably never read it. It’s a shame that many books are written by feminists about feminist issues, but not all writers of these books are actually interested in reaching their subjects.

Showden argues that forced childlessness is mostly considered to be due to some fault of the woman, with no data on childlessness and men being kept

Despite that, many of Showden’s arguments and theories are interesting and well-thought through and, even though I personally disagree with some of them, I believe they make a perfect base for some interesting and healthy debate.

The chapter on assisted reproduction highlights which women in the US have access to fertility services and why – including an outline of the history of reproductive health in the US, which makes for a fascinating read. But perhaps the most interesting section of this chapter is her consideration of forced and voluntary childlessness: Showden argues that forced childlessness is mostly considered to be due to some fault of the woman, with no data on childlessness and men being kept. This is also true of voluntary childlessness, which in addition is often seen as something suspicious, with the blame primarily falling on childless women and not childless men. The acceptance of discussing and interfering in other people’s procreation decisions is also challenged in this chapter, which I personally feel is a necessary discussion.

Showden helpfully challenges cultural stereotypes throughout the book, particularly in her chapter ‘Should I Stay or Should I Go?’ which deals with domestic violence. She looks at different groups in the US and compares and contrasts how domestic violence is perceived, perpetrated and, if possible, remedied within different groups. Often her findings are very interesting, sometimes disturbing and frequently go against common beliefs.

In the same chapter Showden highlights the possibility of a woman staying with her husband if he stops being violent and argues that this can still mean that the woman has gained agency. The choice of staying with an abusive partner is one that is not discussed very often and in many cases isn’t a possibility as the abuse is too severe – so is this argument a valid one? I’m not sure. Women are only seen to be doing ‘the right thing’ if they leave and often that is their only option. But would they stay if there was a possible end to the violence and, more importantly, is there a possible end to the violence? Showden discusses some of the success stories and how community awareness is key for people working in this field.

The fourth chapter is titled ‘Working It’ and deals with prostitution and agency. It considers whether a prostituted woman can sell her body and still have real agency. I personally say no, not a chance; I am firmly against prostitution and believe true equality cannot exist along with prostitution. Showden on the other hand argues that “… prostitution does not necessarily have to be abolished for sexual equality to be achieved”. She refers to prostitution as sex work, which is a label I find problematic as it suggests that it is a job like any other job, despite, I believe, it degrading women and causing them harm. Despite arguing that for some it is the lesser of evils if you don’t have a job, Showden only briefly mentions the background of women in prostitution and their reasons for becoming involved.

To cement her pro-prostitution position Showden seems to label any feminists who are anti-prostitution as prudish and conservative and in doing so takes a fairly easy route away from the complex issue. She states: “Those, like abolitionist feminists and conservatives, who would rather attempt to eradicate prostitution than improve women’s existing working conditions through proposals like decriminalisation misunderstand the problems with the job and are making the perfect [gender equality] the enemy of the good [job protection].” I think Showden is the one who is misunderstanding or rather, choosing to misunderstand: she discusses different options to deal with prostitution and brings up decriminalisation, but never suggests the possibility of decriminalising the act of selling and criminalising the buyer.

Further, I find it odd that she only looks to the Dutch model as an example and not the situation in Sweden and Norway where prostituted women are decriminalised but it is illegal to buy sex. Showden also only briefly mentions human trafficking and other forced environments so I do feel that she was selective in which sources and arguments she chooses to use.

In the final chapter ‘Agency and Feminist Politics’ Showden discusses, amongst other things, how effective coalitions are and what organisations and bodies can achieve by working together. I agree that this is a beneficial way for organisations working together for a common cause to achieve a common goal. Or as Showden states: “I am offering coalition politics as a way of thinking through how to do politics while being attentive to the shifting capacities and sites for agency”.

Overall this book is not an easy read, but it is still an interesting take on some of feminism’s main issues and what role agency plays in them. It’s always beneficial to have an open mind and to consider other feminists’ ideas, as it can be all too easy to gravitate towards those that have the same opinions as you. But as Showden also argues: “Opening ourselves up to critical assessment of others, and ourselves, is not a programming strategy for politics so much as it is the suggestion of the reflective stance necessary for devising specific political goals and agendas” – it could be said in a snappier way, but it is never the less true.

Up until February this year Anna worked with London specific equality and human rights issues, but is now currently living in Bahrain where she is hoping to start and get involved with some interesting women’s projects.