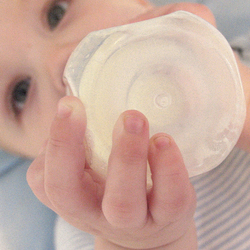 Baby friendly – but is it woman friendly?

Manchester’s largest maternity unit, St Mary’s, is set to become a Unicef-approved ‘Baby Friendly’ hospital by ceasing to provide free formula milk to the women who give birth there.

According to an article in the Manchester Evening News, women who choose to formula feed at St Mary’s will have to bring their own ready prepared milk in cartons from this November; powdered milk will be banned for health and safety reasons. And the word from St Mary’s is clear: the new move is not a cost-cutting exercise but a way to ‘encourage’ more new mothers to breast feed their children.

Staff at St Mary’s are quoted as saying:

“We are still providing formula for babies and mothers whose medical needs mean that breastfeeding is not appropriate.”

“Today on our post-natal ward we have got 56 women who are in-patients […] only five are choosing to bottle feed their babies. Of that five, three of these mums we would still provide infant feeding formula post November due to medical conditions either in themselves or the baby. It is the way women are moving forward. We are just responding to the women’s needs.”

This quote neatly sidesteps a couple of issues. Firstly, what exactly constitutes a ‘medical condition’? Do cracked, sore and bleeding nipples count or does the woman’s health have to be at serious risk? What if the woman is in serious pain or has had a traumatic birth and feels too distressed to breast feed? In the event that a woman claims she is ‘unable’ to breastfeed, who gets to make the final decision? With hospital staff being pushed to limit formula feeding and educate the charmingly dubbed ‘reluctant feeders’ (as per Unicef’s guidelines), it seems unlikely that the decision will be an impartial one.

The second issue is that the staff at St Mary’s are not “responding to the needs” of those women who choose not to breastfeed. On the contrary, they are ‘encouraging’ women to breastfeed, not through increased education, but by removing the option of freely available formula. While women who know in advance that they will not be breastfeeding are invited to purchase their own liquid formula, no mention is made of how women who decide post-birth are supposed to get access to formula.

In the discussions I have observed, the question of whether a woman ‘should’ be given free formula milk is consistently answered by whether she is ‘physically able’ to breastfeed and has tried to do so. I have only seen only two commenters make it clear that a woman not wanting to breastfeed was acceptable. Interestingly, many women who initially seem in favour of being able to formula feed also seem keen to stress that formula is, of course, only an acceptable option for women who “can’t” breast feed.

While some members of the anti-formula camp seem willing to admit, briefly and grudgingly, that women with ‘medical conditions’ should be able to use formula, the message is clear: this should be a rare case.

When confronted with the idea of choice, many anti-formula commenters questioned how ‘informed’ women could really be if they chose to formula feed. Many suggested that women avoided breastfeeding because they could not disassociate their breasts from their sexuality. While the question of the sexualisation of women’s bodies is undoubtedly a valid one, there continues to be systematic denial that there could be valid reasons for a woman to not want to breast feed, even in the face of personal testimony from the women concerned. Women’s negative breastfeeding experiences are being systematically and publicly invalidated.

In an era when many feminists are (in my opinion rightly) dismayed by the suggestion that a woman’s right to an abortion should be subject to conditions, I have been shocked by the high level of acceptance when it comes to the notion that women who formula feed should be forced to justify their choice, not only to medical staff, but to pro-breastfeeding women. While I have never seen anyone claim that formula is better than – or even equal to – breast milk, a large number of women are vociferously and uncompromisingly against a woman’s right to choose formula milk. I have witnessed a sizeable number of women, some of whom are self-declared feminists, debating on one another’s social media profiles and calling for formula to be made illegal.

The tendency to remove agency and autonomy from women who have had children is something that I find highly disturbing. While many women would claim that they are not being “reduced” to the status of “mum”, the discourse that surrounds breast-feeding tells a different story: “But it’s best for baby” continues to be the phrase on the flag. When, exactly, people stopped prioritising what’s best for women is a question that remains to be answered.

[The image is a photograph of a baby wearing blue and white stripes, holding and drinking from a bottle of milk. It was taken by nerissa and is used under a Creative Commons Licence]