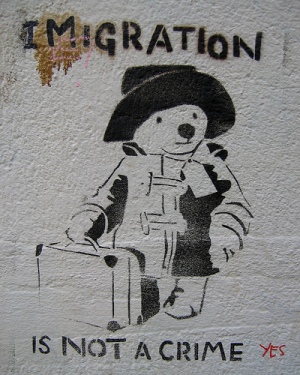 In a blatant attempt to divert attention from the disastrous NHS bill currently going through the Lords, David Cameron yesterday urged us all to shop an illegal immigrant. Not wealthy, well-educated immigrants, of course, just those who have the audacity to try and make a better life for themselves in a supposedly caring country. Exactly how we’re meant to spot illegal immigrants I don’t know, but I assume it will involve some kind of BNP-inspired check list steeped in prejudice, xenophobia and the kind of irrational fear embodied in Cameron’s promise that “Together we will reclaim our borders and send illegal immigrants home”.

So who are these people from whom we must wrench back our borders? Cameron paints a picture of scroungers determined to take advantage of our lax welfare state, creaming off our benefits while contributing nothing to society. He claims that those who are being persecuted will always be welcome in the UK, and that it is only these lazy scroungers the government wants to target. Yet in its attempt to keep out these so-called scroungers, the government works tirelessly to try and deport victims of rape and abuse back to countries where they face further violence and even death. In Sheffield alone we have at least half a dozen people in this situation. And as Flavia at Tiger Beatdown carefully documents in this post, the companies responsible for detaining and deporting these people are reported to perpetuate horrific human rights abuses, all to the tune of a mighty wad of cash. One of these companies, G4S, used to run Abu Ghraib.

This is what happens when you dehumanise people by making them “illegal”. Personally, I think we should be proud of the fact that people look to the UK as somewhere they can make a better life (though sadly this often isn’t the case), and I think we should be more than happy to help those who want to come here. People beyond our borders matter just as much as those within them, and framing immigrants who won’t automatically join the middle classes upon arrival as a drain on the economy and welfare system is just another way of blaming the poor for rampant inequality perpetuated by the rich.

If, once Mr Cameron has collected the billions of pounds worth of taxes stashed away in offshore accounts by 98 of our FTSE Top 100 companies, we still genuinely cannot afford to care for people born outside of the UK, then I might have some time for the argument being put forward. As things currently stand, encouraging the public to report people who don’t speak English very well and can’t recall the exact date of the Fire of London to Crimestoppers so they can be violently deported by a profit-driven corporation accused of “playing Russian roulette with detainees’ lives” is just disgusting.

Photo of graffiti stencil featuring Paddington Bear and the text “Imigration [sic] Is Not A Crime” by daveknapik, shared under a Creative Commons Licence.