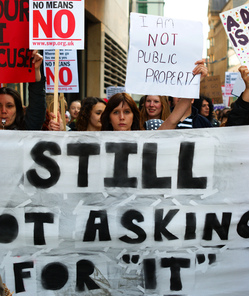 This morning I was watching This Morning which, a bit like Tonight, is an unfortunately named TV programme that also describes the time of day it is on. Cue comedy sketches about “What are you watching?” “Tonight” “Yes, what are you watching tonight?” etc.

The programme didn’t have my full attention, but I tuned in when Eamonn Holmes and Ruth Langsford were interviewing a woman who used tactics from the CSI series to try to ensure that the man who raped her was caught. So when Lance Corporal Jonathan Haynes was attacking her, she pushed strands of her own hair into the seats of his car, and spat, to ensure that her DNA was found, should his car be searched. Her actions have contributed to him now being sentenced for the attack not just on her, but for the rape and attempted abductions of others too.

Abbi, who was 18 when she was attacked, was inspiring to watch. I hesitated about writing that, because creating a hierarchy of ‘inspiring victims’, as opposed to victims who don’t take such actions, or who don’t go on to do incredible things, is unfair and oppressive, and reminiscent of the Supercrip phenomenon. However, she just was. The end of the interview came, and Eamonn Holmes said something that caused my jaw to drop open. This woman had just talked about a horrific experience she had been through, she had forgone her right to anonymity to do so, and as the interview closed, Holmes said, “Well, I hope you take taxis now”.

That’s right. He hopes she takes taxis now. Because the moral of the whole story was that, frankly, none of this would have happened if she hadn’t dared to be outside, near her house, when a kidnapper and rapist was around. The victim-blaming attitude encompassed in that one sentence is as astounding as it is offensive.

The truth is that women cannot win with attitudes like Eamonn Holmes’s around. As a survivor, I feel it personally when it is insinuated that women should have done more to prevent their own assault. The injustice of that attitude causes me true pain, and I feel helpless in the face of it because as long as we blame the victim, we are not blaming the perpetrator. And if we don’t blame the perpetrator, things will never, ever change.

This is why I am going to complain to ITV, and I would encourage others who feel strongly to do the same. The clip is not available to watch online yet, but once it is, you can form your own opinion.

[The image is a photograph taken at Slutwalk Manchester. In the foreground is a large homemade banner which reads “Still not asking for it” and in the background are lots of women with placards, reading “No means no” and “I am not public property”. It was taken by Phil King and is used under a Creative Commons Licence]