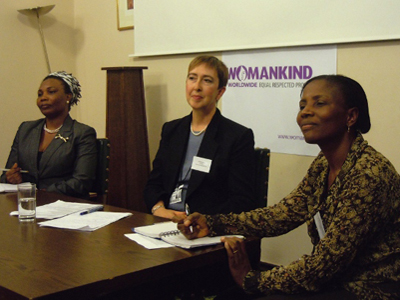 “Behind every great man there’s a great woman”: surely one of the most irritating clichés routinely used to devalue the contribution of women in this global sexist patriarchy of ours. That it still has traction nationally and at an individual level was brought home to me last night while listening to a panel of Ghanaian women speaking of their experiences in improving the status of women in the republic. I was at Womankind Worldwide’s Ghanaian women driving success event and the clear message was that, although the status of women has been greatly improved since a constitutional democracy was established in 1992, there is still much work to do to establish women’s issues and rights as equally important.

One might think, having your country’s economy listed as The World’s Fastest Growing Economy by the IMF and a predicted inflow of capital now that commercialised oil production has started [via] as well as being declared a Middle Income Economy [via], that the future for the republic is bright. However, financial indicators paint only one picture, and a very monochrome one at that: the reality is that many people remain poor and this has its own less visible costs.

Margaret Brew-Ward (Gender Centre) pointed out that discrimination against women and girls is a major issue, and old attitudes still prevail, particularly (but not exclusively) in the north of the country. A combination of modern laws and traditional practices too often means that the concerns of women and girls are often overlooked in such key areas as:

Bernice Sam (WiLDAF National Programme Coordinator) added that the status of women and women’s issues were being addressed locally and nationally. Policies evolve at a local level following discussion and involvement in social issues, and quotas and subsidies enable women to access governmental roles. As a result, the phrase women in politics now has wide acceptance, resulting in women’s voices being heard more clearly and more often. But although women’s issues are unarguably beginning to be foregrounded and taken seriously, a paradigm shift in attitudes is still required for progress to really begin. That can only happen over time, but with the tireless work of women like Margaret and Bernice, and appropriate support from organisations like Womankind, it’s to be hoped that the smaller positive changes will continue until sufficient momentum has been gained to enable women to take their rightful place throughout Ghana’s social, cultural and political life.