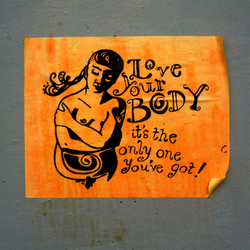 Love It!: my bargain boob-job shame!

You enter the store. You want to buy something highbrow to read on the train, to look all intelligent and that. You want to buy Prospect so you can look like someone who knows politics, or Empire so you look like a film buff, or Wired so you can look like someone who knows what wi-fi actually stands for. And you imagine the admiring glances of people on the other side of the carriage. Look at her, you imagine them thinking. See how she eschews Heat or Grazia in favour of dense, thick, perfect-bound magazines about actual stuff. There, they will say, is a woman who knows her shit.

But there they are: glossy magazines with headlines screaming ‘My Dog Ate My Face Off!’ ‘Sex in a Lift with Her Own Brother!’ or ‘The Cook Sliced Me Up Like His Dinner!’. As soon as I see them all thoughts of AI, Tilda Swinton or the West Lothian Question vanish from my mind and I binge-buy three or four of these sensationalist sheets to stuff in my bag for the journey.

And why not? Yes, they’re over the top; yes, their production values are minimal; and, yes, I still can’t understand what editorial thinking lies behind the decision to juxtapose these tales of human trauma with a picture of a smiling young Caucasian woman with Hollywood teeth: but they represent experiences from a perspective – female and working-class – which the posher mags generally ignore. The cliché that ‘all human life is there’ doesn’t really fit, because the bias towards the sensational leaves little space for more quotidian or reflective material, but whatever else you say they certainly do cover a wide variety of content – from the ridiculous to… well, the ridiculous again, but at least a different flavour of ridiculous.

(And plus, they’re cheap. Have you seen how much Empire costs these days?)

So: I buy these magazines. I admit it. They’re my guilty secret, my trashy shame. Or they were, until one of those magazines took trashiness to a whole new level.

‘Love It!’ Magazine have decided to run a campaign called ‘Britain’s Got Body Issues!’ Terrible title, but in keeping with their idiom. So, how are ‘Love It!’ helping their readers deal with their body problems? Are they offering counselling? Doing body-positive photo-features? Perhaps working with Susie Orbach’s Endangered Species campaign? Er, no. They’re doing it by giving away boob jobs.

Seriously. In their 6 October issue, ‘Love It!’ announced they were ‘launching a month of free plastic surgery!’ and were ‘starting with what most girls want…BIG BREASTS!’

This would be bad enough if ‘Love It!’ were only giving this away to, say, random readers in a lucky dip. But instead they’ve made it a competition, where ‘readers can vote on who most deserves the surgery’. This really is the aesthetic surgery equivalent of The X-Factor, a gladiatorial freak show in which women will compete to see who has the direst décolletage, or the biggest sob story – and the winner gets the chance to undergo a potentially deadly surgical procedure without having any counselling or help for deeper problems! Some prize.

Worse yet, the whole thing seems to be some co-promotion between ‘Love It!’ and the surgical centre offering the procedures. The first 200 readers to text in their entry (‘£1.50 plus standard network charges’, of course) get 20% off surgery at the clinic even if they aren’t judged ‘worthy’ enough for free silicone or saline enhancements. This isn’t about body issues at all, it turns out – it’s about money, marketing and publicity.

The clinic gets publicity and a Groupon-style increase in custom in return for a relatively small discount. ‘Love It!’ rakes in the cash from the phone charges, plus whatever the clinic is paying for the publicity. It’s a win-win situation: except for those who enter the competition, have their boobs and personal histories pored over by readers nationwide, and find they aren’t successful. Or those of us who want to live in a world where a woman’s worth isn’t based on the size of her norks.

So please email ‘Love It’s editor at [email protected] and let her know what you think; join us on our Facebook page; and tell more people about our campaign. Together we can tell ‘Love It!’ that some of us want a world where women aren’t made to feel bad because of their bodies. Because Britain has got body issues – but there are better ways to deal with them than giving away free implants.

[The image is a photograph of an orange sticker on a grey wall. The sticker has a drawing of a woman hugging herself, and the words Love your Body, it’s the Only One You’ve Got. It is adapted from the original by Jason Taellious and is used under a Creative Commons Licence]