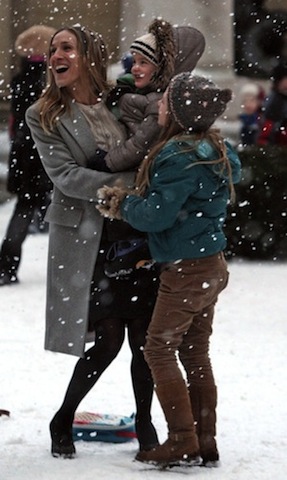 New review: I don’t know how she does it

This Hollywood blockbuster’s heroine is a high-flying finance executive, but Diane Shipley argues that women across classes and careers share parts of her predicament and can applaud her small victories over a lazy husband and an over-demanding boss

Allison Pearson’s 2002 novel I Don’t Know How She Does It asked the question: “Can women have it all?” and came to the conclusion: “Probably not.”

The recent film adaptation of the book has moved the action from London to Boston, but the question remains. “Having it all” is, of course, the hackneyed phrase summing up marriage, children and a successful career, all of which (it is assumed) is every woman’s destiny.

I found myself flinching with frustration throughout the opening scenes which showed Sarah Jessica Parker (as our heroine, Kate Reddy) getting home after a business trip and going straight to the local deli, where she bought a pie for the bake sale at her daughter’s school, which she then attempted to make look home-made so that none of the teachers or stay-at-home mothers would judge her.

She then lay awake, making lists in her head of all the things she had to take care of: her daughter’s birthday party, year-end reports for work, getting the car serviced… Although “of course”, her voiceover informed us with a jocular tone, the latter should really be her husband’s job. We get the message — she’s busy, and she believes in stereotypical gender roles. But as the camera panned to her husband Richard (Greg Kinnear), sleeping soundly next to her, I wanted to scream: “Why are you taking on all the responsibility for the kids and the chores without question?”

Click here to read the rest of the review