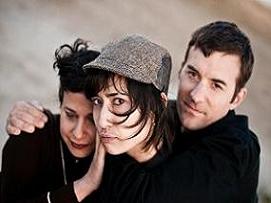 Sophie Mayer reviews Evangelista’s In Animal Tongue and is enraptured by the lyrics, vocals and productions of charismatic frontwoman Carla Bozulich

“Tonight I rode her broken back.” A single-note throb of electric guitar over bass drone . It’s an arresting opening, a route straight into Evangelista territory. Steeped in the landscape and language of murder ballads and gospel blues (that broken back belongs to the lamb of a dark god), In Animal Tongue takes up the vocal power of evangelism, the speaking in tongues and charismatic preaching that Christianity claims as its own and sticks that feminine ‘a’ on the end, not preaching but playing. As the title of the final track, ‘Hatching,’ suggests, this album wants you to be reborn to the throb and screech and groan of your animal nature.

The band list their genre as gothic on their MySpace page, although this is gothic like the wildness of the Brontë sisters’ novels, rather than like The Cure. When female musicians enter what could be called PJ Harvey territory – sex, death, God, blood – music journalists are all too tempted to wrap them up in clichés of witch hunts and hysteria, evoking images of the possessed girls in Salem speaking in tongues.

Animal tongue here is a sophisticated rawness that sings of the body while extending it through technology, as Bozulich’s voice loops, echoes, yearns and calls out through a drone-driven soundscape (provided by bassist Tara Barnes, co-Evangelista) that will resonate with fans of Godspeed You! Black Emperor (labelmates with whom Evangelista have toured), Swans and the intelligent, passionate noise highlighted at this summer’s ATP I’ll Be Your Mirror curated by Portishead and headlined by PJ Harvey.