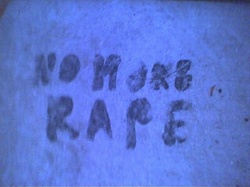 A few weeks ago it was Top Man, then in the last few days they all seem to be coming out of the woodwork. T-shirts are on sale about rape, not even subtly so, but blatant jokes and boasts about rape.

I have hesitated about writing about this, because I don’t want to give these people unnecessary traffic, but the last two I have seen have so appalled me that once I stopped feeling quite as much like I was going to be sick, I decided to write.

I am deliberately going to use links in this post that are not clickable, because I strongly advise against clicking them. I don’t think there are enough trigger warnings in the world, really.

After getting a barrage of emails from Natalie and many others, chargrilled.co.uk took down a t-shirt reading “No + Rohypnol = Yes”, and they have also removed one about being an internet paeophile. The ones that have come to my attention this evening are also about rape, and the second in particular is beyond foul.

I do not know what has happened in the world that a designer thinks it is ok to create these designs. And then for a website owner to think it’s a good design and add it to their site to sell. Why did nobody, at some stage in this process, realise that it was a dreadful idea? And who would wear these shirts?!

1stoptshirtshop can be contacted here, and this seems like a good place to start to get these appalling designs taken down.

Edited to add: It looks like the two t-shirts above have been taken down off the site. Thanks to everyone who emailed the company.

[The image is a photograph of the stencilled words ‘No more rape’. It was taken by Steve Rhodes and is used under a Creative Commons Licence]