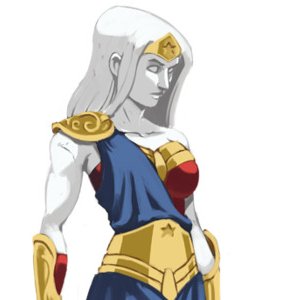 If you could redesign the costumes of the major superheroines, what would you change?

Complaints about how female superheros are represented in comics are hackneyed. But the issue has been resuscitated after a particularly ludicrous, ‘sexy’, reinvention of the characters Cat Woman and Starfire by DC. To encapsulate the problem, fantasy writer Michele Lee showed the re-bootyed version to her seven-year-old daughter, who is a major fan of Starfire as she appears in the Teen Titans series. Go read that if you’re in need of a refresher course on what is wrong with much superheroine design.

Meanwhile, comics author Aaron Diaz decided to have a bit of fun redesigning the costumes of some classic superheros, reworking them so the costumes and design better reflects the characters. He does male characters too, like Superman. But I’m mentioning this here because of the redesigns of Starfire, Wonder Woman and Ms Marvel.

I’m sharing here because it to me shows how unimaginative the cliches of comics can make artists; especially with the female superheros, the all importance of designing them to certain specifications of supposed superhuman sexiness, really does make things boring.

I love Diaz’s reworking of Wonder Woman most of all, as literally a statue:

One part Thor, three parts Xena. I’d push the mythological angle further. Just as nobody thinks of Thor as “Superman with a hammer” I don’t want Wonder Woman to be “girl Superman,” as she’s sometimes seen. I’ve also tweaked her origin slightly, making her a more literal “statue come to life.” This isn’t as extreme as it seems: in regular canon, Wonder Woman’s origin was that she was formed out of clay by the queen of the Amazons, and imbued with the powers of the Greek Gods. 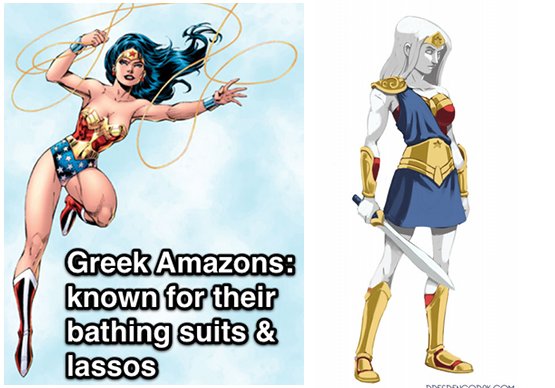 Anyway, all five redesigns are interesting, as is Diaz’s commentary on the problem with the current designs and why he made the decisions he made. Go, read, enjoy.

See also: The evolution of Lois Lane and Are comics less sexist than they were in 1983?.