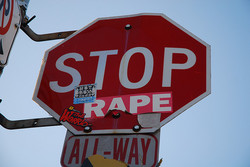 Trigger warning: this post talks about the language and reality of rape. All of the links do the same. Please progress carefully.

This morning, Johnny Depp is reported to have said, when talking about being in a photo shoot,

“Well, you just feel like you’re being raped somehow. Raped … It feels like a kind of weird — just weird, man. But whenever you have a photo shoot or something like that, it’s like — you just feel dumb. It’s just so stupid.”

In doing this, he portrays an increasing cultural acceptability of comparing rape to things that are not at all like rape.

For instance, a few months ago, Netflix in the US increased their prices, and BuzzFeed collated some of the ‘most outrageous netflix price increase reactions’: 7 of the 24 accuse Netflix of raping them. Similarly, a writer having their words stolen does not constitute rape. Countering this misuse of the word, Angela B says,

If your copyright is infringed…

…you may not even know it happened; once you know, not much changes for you.

…there are clear legal remedies and an enforcement arm that is usually willing to do its job.

…no bruises, pregnancy, STDs or other physical repercussions.

…nobody takes the side of the infringer.

…nobody asks what your article was wearing.

Cara at Feministe and Sady Doyle have written about a man describing the development of a TV show as being like rape; podcasts talk of ear rape; there is a type font available called date rape; there is a different kind of font rape; instant messenger rape; AIM rape (different from IM rape, apparently); instructions on how to facebook rape your friends, and a website with examples; and on and on and on. You get the idea.

There are two main issues with using the word rape to describe things that are not rape. The first is that it devalues the word and desensitises us to what it means. If someone has just been facebook raped, it might not mean that much to them if their friend is actually raped*. Not if, over time, rape is consistently used to mean price rises, annoying pranks, loud noises and blog posts reprinted without permission. It takes the impact out of the word, when the crime of rape can have an unbelievably significant impact on a person’s life. Angela Rose, from PAVE, said,

“The more we dilute this word, the more we play down the power of sexual violence. It actually adds to the silence surrounding this issue because it diverts attention.”

Mikki Halpin goes on to say that

“This demoralizes victims, whose traumatic experience is now ranked along with a poor performance review or a hefty cell phone bill.”

The other danger is that of triggering rape survivors. Not only can we see our experience being demeaned by the misuse of this word, but the way it is casually thrown about can trigger flashbacks, nightmares and trauma. Many rape survivors have the symptoms of Post-Traumatic Stress Disorder (PTSD). A PTSD trigger can be many things, including a sound, a smell, a memory, a word… This website talks specifically about PTSD in rape survivors.

thingsthatarenotrape.tumblr.com lists ‘Forty-nine things that are not rape and one that is’. Number 50: Rape is rape.

Edited to add: I appreciate that I might not have worded that particular sentence as well as I might have, to convey the meaning I intended. I was talking about the verbal impact of the word, and I was thinking about it from the point of view of the person who has been raped. As I may have expressed it badly, I will present an alternative now: If you have been raped and you want to tell somebody, and they then tell you they have just been facebook raped, it may well put you off because it might lead you to believe that they did not have an understanding of what being raped actually meant, if they were happy to use the word in that way. I apologise that that was not clearer.

[The image is a photograph of a traffic STOP sign, which has been subvertised with a sticker of the word ‘rape’ underneath it. It also has two other stickers on it, and is above a traffic ‘all-way’ sign. It was taken by Nigsby and is used under a Creative Commons Licence]