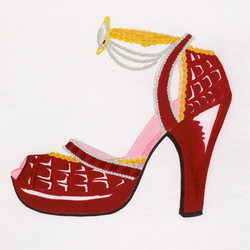 Wearing a pair of tottering heels…

I remember noticing, as a child, that when the then Prime Minister Margaret Thatcher was in the news for having met with one foreign official or other, the report frequently went along the lines of, “Mr X was keen to strengthen relations with Britain, and Mrs Thatcher looked very fetching in a blue suit and matching handbag”. I didn’t understand why she had gone into these clearly very important meetings with no views or policies or corners to fight for, so instead the reporters had had to resort to describing what she wore. I didn’t realise that it was a flaw in reporting, it was a flaw in society that meant that even the most powerful woman in the country was judged more on her appearance and her attire than what she said.

Now, to say that I am no fan of Thatcher would be a vast understatement, but it was unfair that she was represented in this way purely because of her gender. I was talking about this very thing last week, how we laughed, remembering the good old 80s and its chauvinism.

Then today, while scanning the twitter feed for the Conservative Party Conference, a headline caught my eye: Baroness Warsi ignores ‘anti-Ed ban’: Wearing a pair of tottering heels, Sayeeda Warsi stomped on Ed Miliband and his rhetoric at conference last week.

The feed in question was moving fast, so as I clicked on the link I assumed I had misread the subheading, but sadly I had not. Baroness Warsi’s shoes were apparently so notable that a report on her conference speech had to mention them in the subheading, and the article itself.

I haven’t yet noticed any reference to the shoes of the men who have spoken at the conference. William Hague is talking as I write this, and I have no idea what he is wearing on his feet. Which is either slack reporting, or proof that footwear isn’t in fact that important in political oratory.

[The image is a drawing from marker and colored pencil, of a red shoe accented with pearls, large pearl jewel and gold braided trim. It is by erichazann and is used under a Creative Commons Licence]