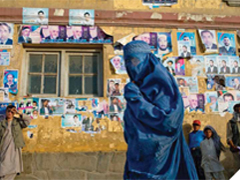 Women in Afghanistan: 10 years on

As I mentioned in my earlier blog post, this Friday (7 October) sees the 10th anniversary of western intervention in Afghanistan and ActionAid UK is marking the date with its Women in Afghanistan: 10 years on campaign.

As part of this, ActionAid polled 1000 women across Afghanistan to obtain their opinions about living through the last 10 years of war and the current reconciliation process. Here are some key findings from the survey:

The full report, A Just Peace? The legacy of war for the women of Afghanistan, may be downloaded as a 20-page PDF directly from here.

As part of the campaign, ActionAid is calling on the UK government and the international community to protect women who have defended women’s human rights in Afghanistan in the last ten years, to support women’s organisations with direct, long-term funding and to ensure that women’s voices and views are heard at the Bonn conference in December, where the international community will discuss Afghanistan’s future.

In 2001 our leaders went into war in Afghanistan saying that improving women’s rights was a goal of intervention. Ten years on as the international community begins withdrawing troops and enters into peace talks with the Taliban and other insurgent groups, women are being frozen out of the process and are worried that their rights are being traded away for peace.

If Afghan women are excluded from decision making on the future of their country we risk not only sacrificing the gains made for women over the past ten years, but Afghanistan will be a less stable society as a result.

Trigger warning: the following video, produced by ActionAid, contains material (words and images) which some people may find disturbing.

The image at the head of this post was adapted by Helen from the cover of the ActionAid report ‘A Just Peace? The legacy of war for the women of Afghanistan’. Original photography: Jenny Matthews/ActionAid