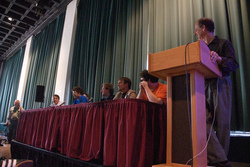 A letter has appeared in today’s Guardian from a group of women about conferences and events where the line-up of speakers is all male. They state,

As advocates and activists around gender equality – some of us in political parties, others not – we will no longer be attending events where there is an all- male panel without exceptional reason and will also be encouraging others to do the same. Most events could easily have been more thoughtfully planned with a better balanced panel. The benefits of this for all of us are clear: wider representation makes for more informed debate and better policy outcomes. We strongly urge all thinktanks or similar organisations to adopt a policy of no longer holding events without a consideration for gender balance.

This is in line with a call several months ago for men* to refuse to be on panels of all white men, and it seems to me that if enough people take note of both of these calls then the long-overdue change in this arena could really be speeded up.

One of the signatories of the letter, Emma Burnell, has issued a challenge, in the face of previous accusations of tokenism on the issue. She says,

“I am so confident that it’s twaddle, I challenge my challengers. Find me an all male panel – in fact, find me any topic on which you could reasonably hold an informed public debate – and I’ll give you the names of five women who could hold their own on the panel”.

All-male panels should be a rarity in this day and age, a relic of the past that is notable in its old-fashioned exclusivity. Until that is the case, I will join the signatories of the letter and say that I will no longer attend events where there is an all-male panel, without exceptional reason.

*Edited to add: Apologies for missing out the word ‘white’ here.

Hat-tip to Lilli Geissendorfer who shared this story on twitter

[The image is a photograph of a panel of speakers at a conference, all apparently white and male. It was taken by David Fisher and is used under a Creative Commons Licence]