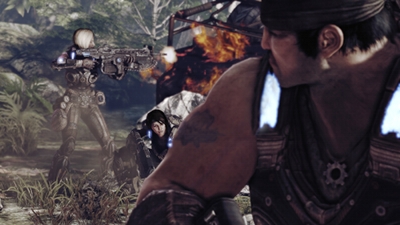 Moving up a gear

The original take-cover-and-shoot game came lumbering to a close with the release of its final instalment just a month or two ago.

Much has been dedicated to the novelty of seeing a game franchise actually end (as opposed to endlessly hinting at sequels).

But one important aspect of the third game has been largely ignored.

In previous instalments Gears had been an almost exclusively male domain, saving the presence of the main antagonist, Queen Myrrah, and your mission control, Anya. However, Gears of War 3 finally allows women to take the front lines as combatants. And even as playable characters. It’s sad that this is still a big deal for first-person shooters, but it is a fact that deserves recognition, even if the presentation of these women does not always stand up to scrutiny.

It’s been a few years since the ending of Gears of War 2 and humanity is clinging on to survival any way it can while continuing to wage a war against the bloodthirsty Locust, a bunch of evil monsters. The main protagonist, Marcus Fenix, has joined a military ‘COG’ community based on an aircraft carrier led by former operations manager Anya Stroud, who now combines her administrative duties with frontline combat. Quite a few of the people in positions of power that you’ll meet over the course of the game are women, from Anya herself to a couple of the survivor colonies that the main characters visit.

On the ‘good’ side, at least, both female and male characters are represented equally. This is reflected in the fact that all of the playable female COG soldiers (Anya, Sam and Bernie, who is also an older woman) share the animations of their male counterparts. It might sound overly nitpicky to point out this detail, but too many games seem to feel that its necessary to give their female characters special animations (The mincing run that the female main character has in Dragon Age 2 comes to mind) that emphasise their sexiness. Anya, Sam and Bernie all move like the soldiers that they are. In multiplayer matches, none of these characters play differently and as a female player you are not made to feel as if you’re taking a choice that has just been added in at the last moment.

Unfortunately, storywise there’s a lot left to be desired. The plot is quite thin and the characters les than compelling: Anya has the personality of a piece of damp bread and Sam is defined by two things: her unrequited feelings for Marcus’ friend Dom and her vitriolic relationship with squadmate Baird. Apparently both women are in romantic relationships but the writing doesn’t emphasise is sufficiently and the characters don’t have the strength or subtlety to convey the fact through their interactions.

This isn’t a problem unique to the female characters, however. Marcus has just one emotional setting (‘angry’) and the rest of the guys don’t fare much better. So, keeping that in mind, it’s hard to criticise the way in which Sam and Anya are presented when their male counterparts are all also mostly one-note stereotypes.

Gears prides itself on its ‘manly’ status, but that status seems to be reinforced by an almost cartoonish phobia of emotion, nuance and thought

What was far more worrying was the repeated use of ‘bitch’ throughout the game to the point where it became virtually meaningless. It was applied to pretty much every enemy through the five acts of the campaign, from giant spiders to Myrrah herself. It became completely ludicrous and that is the ultimate indictment of the game itself.

Gears prides itself on its ‘manly’ status, but that status seems to be reinforced by an almost cartoonish phobia of emotion, nuance and thought. There are moments where the player can see what the game might have been if it wasn’t so drunk on testosterone (the Pompeii-like ash remains scattering the ruined city of Char, or former sports star Cole encountering the remnants of his pre-war celebrity in an abandoned supermarket- more significantly, Anya’s guilt at being part of the command structure of a government that left civilians to die) but these are few and far between.

Ultimately, the multiplayer modes are good fun that allows you to play a female character in a combat role for once, but steer clear of the main story unless you want a good long- and somewhat bitter- laugh.

Olivia Cottrell is based in London, and has an MA in English Literature from Cardiff University. She has loved video games since her parents accidentally let her play the Blade Runner PC adaption, and now spends the majority of her time pretending to be a space marine, adventurer or assassin. She also enjoys reading, writing and swearing at her knitting.