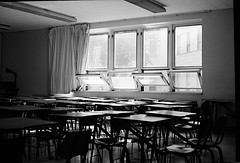 In support of teachers striking

Striking teachers; does it get any more disruptive? Kids need looking after. Parents lose days at work. Companies lose their staff for a day. Students lose a day of education and teachers lose a day of productive time. Let’s get real here striking is disruptive. That’s the point. It is a last ditch desperation cry. Teachers feel they are drowning in the government’s directives and are putting up a hand for help. Send new targets, change the curriculum, phase out tests, bring in new ones. Tell the public teachers are not good enough, that they must be better, freeze their pay but don’t screw with the pensions. As Chris Keates, General Secretary for teaching union NASUWT says:

Teachers have been faced with a rising tide of excessive workload and a series of attacks on their profession, including unjust pension reforms, worsening pay and conditions of service, and increasing job insecurity. [via NASUWT]

It’s a step too far.

For me this is a women’s issue. I know, I know I’ve decried that horrible phrase before but I want to make a link here between those dastardly teachers throwing a spanner into a working Wednesday and the casual erosion of women’s positions in society. A huge proportion of classroom teachers are women.

The presence of women teachers -particularly in the early childhood and primary levels- is a long standing phenomenon that characterises the education system of many countries. [via UNESCO (PDF)]

There are a host of reasons why. One of them is the great child-friendly hours that the job provides. The endless hours of preparation and marking can be done at home with the kids safely fed and in front of the T.V. These women have worked at a job throughout their lives and are now losing their security in retirement and being asked to work a lot longer in order to receive that money.

Teaching, nursing and all sorts of roles can be romanticised as something more than just work; something akin to giving. While I have huge admiration; a job’s a job. We mostly do whatever we do for the cash at the end of the day. Although compare a public sector care job with a banker and I know which I feel earns their wage. It’s trite though so let’s not go there. One of the expectations teachers certainly had until a few years ago was that their pensions were part of the total pay package. So that although wages were not huge for the work entailed and certainly no bonuses would ever be offered the pension would make up for the shortfall. The anger here lies in the feeling that the government is hiding behind economic problems to make a political cut.

Teachers pay into the pension scheme themselves and so those in the middle or towards the end of their working lives have invested a huge amount into something that may be changed before they get to see the benefits. According to the NUT fact sheet regarding the upcoming strike teachers will have to pay 50% more into their pensions schemes. If they are more than ten years from current retirement age they must work longer to get the money. [via www.teachers.org.uk (PDF)]

The final thing that should be acknowledged, but rarely is, is that teachers lose a day’s pay for striking. It isn’t a paid extra holiday. Often the media portrays teachers as carelessly jumping on the bandwagon for an extra day off, but in truth they feel worried enough to take industrial action and lose a day of pay and productive work in order to fight to be free from poverty in retirement. The Fawcett Society calls attention to the government’s slow cutting away of women’s equality saying:

[O]n average, women earn less, own less, and are more likely to work and retire in poverty than men. The government’s approach to cutting the deficit will widen the gap between women and men.

The action on public sector pensions is another symptom of this. So when your child’s classroom teacher takes next Wednesday to strike don’t fall for the media line and chastise and moan about them. Stand up for women who work for and in our society and support them. If women don’t support each other then who will?