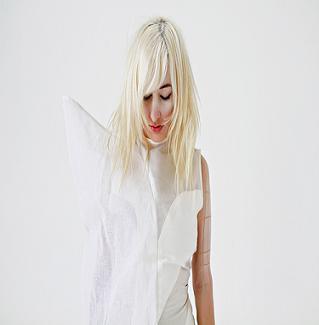 Nika Danilova -AKA Zola Jesus- grew up training to sing opera whilst listening to Throbbing Gristle and the Dead Kennedys. As the nights draw in and temperatures drop, David Wilkinson reviews third album Conatus

Zola Jesus is 22 year old Nika Danilova, a diminutive but enormously-voiced Russian-American singer, musician and songwriter who first emerged from the underground in the UK last year with her second album Stridulum II. The title came from a late 70s horror film and it was this -along with the cold drama of Danilova’s opera-trained voice, the influence of industrial music and her use of stark, frequently monochromatic imagery- that got her tagged at the time as belonging to a supposed goth revival.

Danilova was keen to reject such attempts at classification: “If goth is trendy again then I’m buying fucking polo shirts”,she announced to music website The Quietus.* But one of the central tenets of goth is its individualism, a Romantic hangover that frequently adds the explosively creative tension of contradiction to many musical genres and collective, subcultural identities. You wear black, invoke pain, mystery, melodrama and epic landscapes, but you’re not a goth? Of course not.

Danilova might say that her lack of connection to a like-minded community (she claims in an interview with The Fader to have only ever had three close friends in her life, including her husband) cuts her off from generic continuity, but then aren’t goths also outsiders, the weirdo at school? I know I was. All I can say is that it feels highly appropriate that I’m writing this review at Halloween.