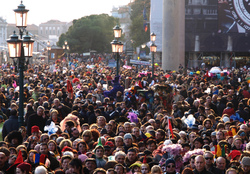 This is a guest post by Mary Tracy. Mary is a writer obsessed with feminism and all things politics. She wants to start a political outlet with an artistic bent.

World population is about to reach 7 billion. I mention this to you because of the outpouring of “world population” scare that is already making its way to the desks on Fleet Street. Journalists the world over are polishing their angles on this most unsettling of news. I cringe to think what the Son and the Daily Male will come up with.

The one and only solution to “overpopulation” has been spelled out by feminists enough times for the whole world to know it backwards and forwards. But I’ll say it again. The only way to prevent overpopulation is to empower women. That’s it.

Of course, to us feminists, this “solution” rings unbelievably obvious. When women have control over their lives and their environments, they have fewer children.

The rest of the world, though, has been slow on the uptake. It is one of those “solutions” that nobody likes because they are complicated, uncool, old-as-the-hills and all round boring. It’d be much more fun if the answer involved robots. But it doesn’t, and it won’t.

Empowering women, that’s where it’s at.

As feminists we need to be vigilant for the moment when the “overpopulation scare” turns its accusing finger towards women and their wombs. As we know only too well, procreation and fertility are always framed as a “women’s issue”. Men’s involvement in the matter is hardly ever brought up, and never with as much outrage. For every mention of Vicky Pollard claiming benefits for her 14 children, not a word is spoken of the 14 men who have fathered them.

Yet the issue of overpopulation has more to do with men than women. In order to illustrate this point, I’m going to quote part of a woman’s letter to the editor which in my opinion, is the most famous letter in herstory.

I remember being at school and reading this letter in class, somewhere. Above the letter was the picture that the author was criticising, for it had been used to illustrate “overpopulation”: the profile of a pregnant woman with the world drawn on her belly.

The letter appeared in Feministing, where you can read it in full. Here’s the important bit:

“Your picture of a naked, pregnant woman’s belly to symbolize the overpopulation crisis is both vulgar and misleading. A picture of an erect penis would be more accurate. Men’s lust and arrogance, not women’s fertility, is the cause of overpopulation.

Patriarchal religions, such as Roman Catholicism, fundamentalist Judaism, Christianity and Islam, as well as patriarchal societies, such as just about every one in the world, are responsible for the overpopulation crisis”.

The author is right of course. Just as empowering women leads to a decrease in fertility rates, the oppression of women leads to its increase. The reason is that in patriarchal societies women are reduced to the only function men cannot perform.

You can go further along this idea if you feel like stepping into radical feminism. Labouring under the theme of “more” is an intrinsically patriarchal characteristic. Society, culture, people’s subconscious, all regard “more” as the highest possible value. What this means, in essence, is that people must always strive to “more”; more land, more wealth, more power, more status. And yes, more children. An ever growing economy needs an ever growing population.

Patriarchy is therefore at the root of both overpopulation and the capitalist system. In order to tackle overpopulation, we would need to end the need for “more” that keeps the system running. Without a system that requires “increasing wealth”, there won’t be a need to “increase population”.

That would mean getting rid of capitalism, of course; and patriarchy. But while both goals are as momentous as they are difficult, empowering women is, relatively speaking, within easy reach. It has already succeeded in slowing down population growth in parts of the world.

But more than that, empowering women constitutes the essential step to dismantling patriarchy altogether. Only then will we see a real end to “more”.

[The image is a photograph of a very large crowd of people. It was taken by mararie and is used under a Creative Commons Licence]