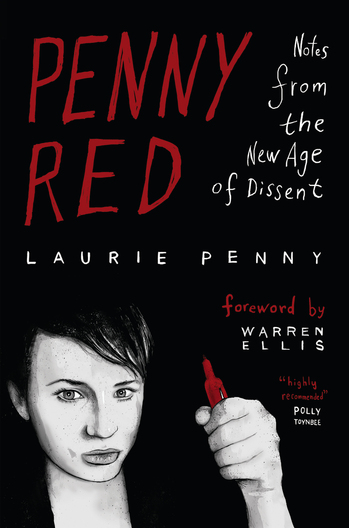 Penny Red: Notes from the New Age of Dissent

Penny Red: Notes from the New Age of Dissent is a collection of blogs and columns written by one of the most engaging young journalists in the UK. Like many young feminists, I’ve long been a fan of Laurie Penny’s writing, discovering her blog, Penny Red, two years ago when I was first learning about feminism. I owe much of my own passion and feminist rage to the inspiration provided by that ever-insightful blog, which was shortlisted for the Orwell Prize in 2010.

In the last year, Penny has established a name for herself as an ardent journalist of the disaffected youth, particularly through her regular blog for the New Statesman and her engagement with both the student protests and the UK Uncut actions. Her writing fiercely mixes social justice and feminism with pop culture and politics, on topics from tuition fees to vajazzling. One of the most striking features of Penny’s style is her impressive ability to articulate the anger that pervades so much of her writing: she harnesses the language of her rage in a way that is vivid, engaging and almost poetic.

Penny does not write as a spectator but as someone who has got stuck into the action, often tweeting live from the scene of kettles and baton charges

This is a woman with a real talent for words, but also a journalist grounded in a hands-on approach to reportage. Penny writes passionately about the issues that affect her life and the lives of young women like her. Most notably when it comes to her reporting of UK protests, Penny does not write as a spectator but as someone who has got stuck into the action, often tweeting live from the scene of kettles and baton charges. She writes as someone who understands the mood of the situation because she’s engaged with it, making no attempt to mask the personal feelings in her writing.

Penny has spoken of being warned against too close an involvement with the student and UK Uncut protest movements for the sake of her career; but she is a writer of conviction with an agenda all of her own, based on principles she passionately believes in – an admirable quality in any journalist.

The book is divided into five chapters: ‘This is Actually Happening’, featuring collected writings on the last 12 months of protests; ‘Girl Trouble’, a selection of Penny’s feminist pieces; ‘Kingdom of Rains’, on politics and the Tories; ‘Cultural Capital’, covering Facebook and Sex And The City, to name only a couple; and concluding with ‘Their Hallucinations, Our Desires’, a revolutionary call to arms, proclaiming the power of the people.

For Laurie Penny enthusiasts, or activists looking for an encouraging boost, it’s definitely one worth putting on your Christmas list

It’s a unified showcase of Laurie Penny’s best writing, from the New Statesman, Penny Red, The Guardian and more, including a number of my personal favourites. It’s not hard to be inspired and moved by much of Penny’s writing, even on points you might disagree with!

This is the second book Penny has published this year. The first – Meat Market: Female Flesh Under Capitalism, which provided a brief but thoroughly Penny-esque analysis of the way female bodies and sexualities are treated by our capitalist society – faced criticism for recycling material from previous articles in what was marketed as an original text. Penny Red, however, is sold as an anthology of Laurie Penny’s most popular pieces, and that’s exactly what it is – nothing more, nothing less, with the exception of Penny’s introduction.

With an RRP of £12.99 it is expensive for what it is and if you’re after something you’ve never read before, or that isn’t freely available online, it probably isn’t the book for you. But for Laurie Penny enthusiasts, or activists looking for an encouraging boost, it’s definitely one worth putting on your Christmas list.

Sarah Graham is a fourth year English and French student at the University of Warwick. She is an aspiring journalist, Content Manager at The Student Journals (www.thestudentjournals.co.uk) and blogs about feminism at petitefeministe.wordpress.com