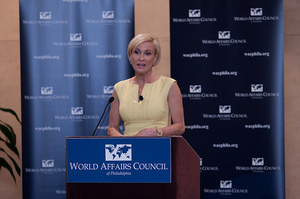 This week the World Economic Forum released its annual gender gap index. The UK shared the top spot with several other countries for female educational achievement, with more women than men attending university. But when it came to women’s economic participation, the UK’s ranking plummeted to 33rd.

Something is obviously going wrong here. If women start off on a better educational footing than men, why do they fare worse once they enter the workplace? Where does all of the educational achievement and potential go? And how do get it back?

Of course, the answer involves a complicated mix of social and economic factors. Various Governments have recognized this and proposed a range of policy-based solutions. Yesterday, for example, we heard about Theresa May’s plans to set up a Women’s Business Council.

However, what isn’t talked about openly enough is something more basic: women’s confidence in the workplace.

When I talk to female friends and colleagues I often hear stories of low self-confidence – professional young women who fail to go for a job, a promotion or a pay-rise. They are not good at selling their achievements and, as a result, are missing out on what they often deserve.

I am not denying that men don’t also experience crises of confidence. However, the combination of the male-dominated working environments and the periods of absence that many women have from work during and after pregnancy, amongst other things, make it a more pressing issue amongst women.

For example, I recently attended a training course about how to be assertive. All but one of the attendees was female and nearly all of them complained about not being taken seriously in male-dominated working cultures. It is these sorts of barriers that women are particularly subject to once they enter the workplace.

Over the summer, against all principles, I bought a self-help book called ‘Knowing Your Value: Women, money, and getting what you’re worth’.

It is written by Mika Brzenzinski, the co-host of a popular morning chat show on MSNBC. Here is a woman who, despite playing a pivotal role in the success of the show, was getting paid fourteen times less than her male co-host.

Brzenzinski details and analyses her failed attempts at achieving a pay-rise and reinforces her own experiences with interviews from some of the most powerful women in America.

For example, Sheryl Sandberg, the COO of Facebook, said: “If we as women don’t raise our hands in the workplace, we’re not going to get the same opportunities men do. Because men keep their hand up.”

Lesley Jane Seymour, the editor-in-chief of More magazine, said “I can’t even tell you how many successful female, CEOs of companies, will say ‘I just got lucky’. But if you think it’s just luck that made you successful, then if you ask for too much, the luck might just run out”.

These sorts of responses are inevitable if women don’t have enough self-confidence – even at the very top levels. Ultimately, lack of confidence is seriously undermining our ability to compete with our male counterparts in challenging working environments.

To rebalance the economic gender gap, we need a large-scale overhaul of certain workplace cultures and the necessary intervention from policy-makers to achieve this. But concurrently, more women also need to start believing in themselves.

It isn’t enough to rely on government policy to bring about change – we also need to seek out the skills and confidence to start helping ourselves.