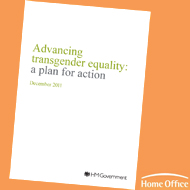 The UK government’s Home Office yesterday (7 December 2011) published its Transgender action plan [direct link to PDF download, 1mb]. The document describes “the specific actions we will take across government to advance transgender equality and it includes firm commitments to improve the lives of transgender people and support businesses and public bodies so they have the right tools to support transgender people“. [via]

The 20-page booklet, Advancing transgender equality: a plan for action, is divided into four main sections as follows:

From the concluding part, Making it happen:

In line with the Government’s commitment to transparency and accountability, we are committed to do two things:

Only if we work together will we achieve the fairer, more equal and more prosperous society that we all want to see.

Of course, how all this will translate into the real world, how the Government’s proposed frameworks are implemented (and accepted by mainstream society), remains to be seen. Let’s hope that it really does fulfil the Government’s stated wish “to act as a leader and catalyst for change, taking the first steps to advance transgender equality, both domestically and internationally“.