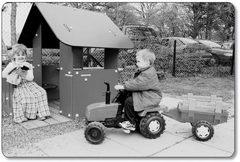 Many things terrify me about having children – no day that involves an episiotomy can be a good day, I feel – but there is one which stands out. If I had a daughter, what would I dress her in? What toys would I buy her? What would I do if she turned to me and said: “Mummy, when I grow up, I want to be a pwetty pwincess”?

I got a preview of that future when buying a present for my four-year-old niece this Christmas. My sister had vaguely suggested I get something for her doll Baby, but I find Baby deeply sinister. (Its eyes roll back into its head as if it’s had an overdose, and there’s something about the plastic toenails which tips it into the Uncanny Valley.) What else is there that she would like, then? The answer is: pink. Yards of it, stretching off as far as the eye can see.

Now, if you’ve been following Pink Stinks – the campaign which raises awareness of the limited range of toys marketed to girls – you’ll know why I have a problem with pink. The “pinkification” of toys has led to such horrors as these “Science Kits for Girls” (will it be the beauty salon or the perfume lab?). Because, you know, girls don’t do “proper” science, only girly science: even though a good proportion of those in the cosmetics industry, and perfumiers, are men.

And it’s not just a problem for girls: one mother on Twitter told me recently that her son would love a diary and a craft kit this Christmas, but the only ones she can find are pink. Male child, know your place! Feelings are for women! Also macramé!

OK, how about some Lego, the beautiful construction toy of my childhood, and the creator of possibly the sweetest advert ever created? My niece happily plays with her brother’s collection, after all. (Don’t worry, I’m not spoiling her Christmas: she prefers to read the Spectator.)

But even Lego has let me down, launching a special “girl-friendly” range of figurines, with big dopey eyes and delicate blush skin, instead of the yellow heads and dot pupils I remember strewing round my bedroom as a child.

It seems like a backwards step for the company, which has largely resisted the rigid gender divisions that affect other toy brands. (Yes, there have been previous girly ranges, but a search for “LEGO for Girls” on its website yields pirates, zoos and camper vans.)

According to the Stylist’s report, “Researchers for the company found that girls aren’t massive fans of the traditional yellow faced ‘boy’ figurines”. I’m going to call bullshit here, for two reasons. The first is that the yellow-faced figurines aren’t unarguably male: with those snap-on bowl cuts, they remind me heavily of myself as a nine-year-old. That’s just a bad haircut, not a statement of gender. The second is that – and I don’t know if anyone has pointed this out before – children are malleable, responding to the stimuli they are exposed to and the cues they are given. If they truly don’t like the yellow figurines, it’s unlikely to be an immutable facet of having a second X chromosome.

There’s always an attempt with these stories about toys to come back to an essentialist view of gender: “look, boys just like trucks, OK? And blue. And girls like pink and dolls. That’s NATURE!” The trouble is that the picture is a lot more complicated than that. As smartarse QI-loving types like me never tire of pointing out, the association between pink and the feminine is, in the history of humanity, an incredibly recent one: it arose within the last century. Cordelia Fine and others have made a convincing case that many other supposedly “hard-wired” differences between male and female brains have been overstated, or are heavily affected by social pressures.

This last point explains why many anti-feminists are so keen for toys to remain gendered: because if it’s not really “natural” for boys to play with soldiers and girls to play dollies, then what other “natural” differences between the sexes (and the iniquities which arise from them) are no longer supportable? Perhaps it’s not really “natural” for women to be under-represented on boards, or get paid less, or do more domestic chores even when they work the same hours as their male partners.

You can see this tactic at work, if you can bear it, in the comments on the Telegraph’s report of Hamleys’ decision to scrap having a blue boys’ floor and a pink girls’ floor, and instead order toys by type (dolls, computers, traditional etc).

Although a feminist blogger, Laura Nelson, claimed this was down to her writing letters to the chief executive, a Hamleys spokesperson said at the time: “The changes to our signage were not due to any campaign.” And I believe them: it seems a sensible commercial decision not to stigmatise your customers. If a girl wants a construction set, how is making her feel abnormal going to encourage her – and her parents – to spend money at your store?

The majority of the Telegraph commenters, however, thought differently, and many engaged in that angry two-step that feminists should be familiar with: “Why are people bothered about this – it isn’t important! I’m going to boycott Hamleys!” It’s a classic tactic: get fumingly angry in support of your own position, while calling your opponents pathetic for asking for a debate at all.

Amid a fiesta of insults and hatred directed personally at Nelson for daring to voice an opinion, and the usual “WHY DID THEY BAN GOLLYWOGS?!? WE CAN’T SING BAA BAA BLACK SHEEP NOW” nonsense, there were some real corkers. Two classics of the genre: “The woman who caused this is a disgrace to mankind. Wait, can I say mankind? That might be too sexist” and “When Tampax will be sold in chewing gum section, the mission will be accomplished [sic]”. (Nope, me neither.)

Clearly, it matters a great deal to lots of people what toys are given to children. Let’s not deny it. It matters to feminists because many “girly” toys give the impression that life is about being, not doing, which does nothing to create the next generation of Rebecca Adlingtons and Angela Merkels and Zadie Smiths and Jane Goodalls. And it matters to those who want to keep the status quo because if they win the battle of the toys, they can tell us it’s our fault we’re not succeeding. Because women are just built that way. Pass the pink sick bucket.