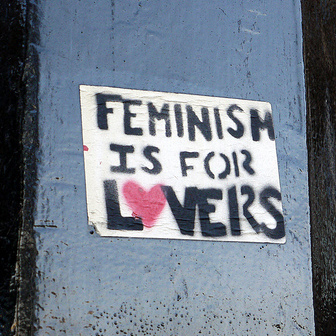 “1) A woman had a hand in the production, writing, direction, etc. of the work.

Isn’t it strange that an activity which – much of the time – is something men and women do together, should be so invariably so distorted when put on camera? I don’t think there is anything about the presence of a camera, or indeed a mass market, that necessarily turns sex into misogyny, but it is depressing when this is so often the case.

Lisa Saunders’ interesting and well-argued anti-porn/pro-sex article on this website yesterday suggests that ‘it’s about as easy to get hold of ‘ethical’ pornography as it is to score ‘ethical’ cocaine.’ My suspicion is that feminists will lose out if we completely write pornography off, forever, the end. The continued presence of feminist voices in other unethical industries hasn’t created any feminist industries, but it has changed some things for the better.

Image from Flickr user the justified sinner shared under a creative commons license. It shows a graffiti stencil reading “Feminism is for lovers” (the ‘o’ in lovers is replaced by a red heart).