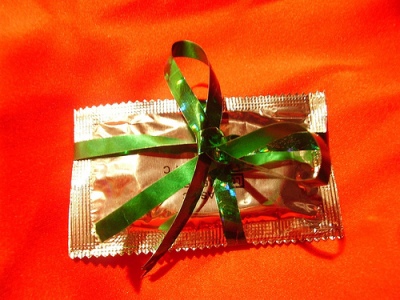 Maybe it’s just me, but any campaign that the Torygraph refers to as “vulgar” and the Fail as “brazen” has got to be on the right track. Our outraged friends refer to BPAS’ decision to offer women the opportunity to access the morning-after pill over the phone, for free, ahead of the Christmas holiday period. The offending advert for the campaign features the text “Getting ‘turned on’ this Christmas?” followed by the word “SEX” written in fairy lights. The viewer is pointed in the direction of santacomes.org, where women can book a 15-minute telephone appointment to receive the pill.

Given that the morning-after pill is more effective the sooner it is taken following sex, that it can be particularly hard to get to a clinic over the Christmas period, and that it costs a whopping £25 if you have to buy it from a pharmacy, this campaign would seem to make perfect sense.

Because women are actually DESPERATE for an excuse to expose ourselves to STDs and HIV, and will OBVIOUSLY view this as the chance we’ve all been waiting for to play fast and loose with our sexual health:

It trivialises women’s sexuality. This scheme isn’t about making women responsible; it will lead to them exposing themselves to more risks.

Thank you, ProLife Alliance. There’s nothing like patronising your target audience to get your message across. Which, somewhat bizarrely, seems to be that helping ensure women do not end up in a position where they might opt for an abortion is a bad thing. Though I suppose, like Life, they can’t tell the difference between a fertilized egg and an adult women, so emergency contraception and abortion are all much of a muchness.

If that hasn’t sated your desire for illogical reasoning, try this gem for size:

Given that one of the main goals of BPAS is to increase its market share for abortion services provision in the UK and that it regards an increase in the number of abortions performed in the past year as a ‘significant achievement’, it is hard to see this scheme as anything other than a cynical marketing exercise. – Norman Wells, of the Right-Wing Misinformation Family Education Trust

I point dear Norman to the statement on the BPAS campaign poster, which reads: “…we see more women with an unplanned pregnancy in January than any other time of the year. We don’t want you to be one of them.” In other words, this cynical marketing exercise to drum up eager abortion customers actually aims to reduce the number of abortions the charity carries out. Whoops.

Thanks to the anti-choicers feeding their outraged press releases to the controversy-hungry media, the campaign has reached such a wide audience that BPAS has experienced “unprecedented demand” and can no longer guarantee that they will be able to deal with requests for the pill before the Christmas period. Which is both a shame, and deliciously satisfying.

Photo of a delightful Christmas condom by anqa, shared under a Creative Commons Licence.