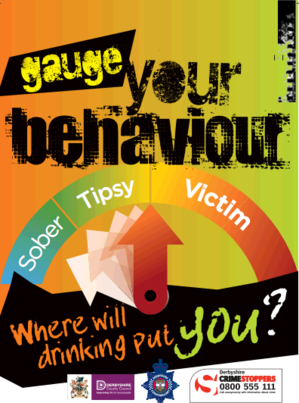 It wouldn’t be Christmas without some victim-blaming posters, right?

Chair of the Derbyshire Crimestoppers Board Ashok Kalia added,

“The main aim of this campaign is to stop alcohol-related violence happening in the first place, but if it does occur we want to make sure that the offenders are brought to justice”.

They also have a virtually identical poster where the word ‘victim’ is replaced by the word ‘violent’.

The problem isn’t just that it is telling people that if they are victimised when they are drunk, then they, quite simply, should have drunk less. It is also that because it directs the attention in rape prevention from rapists, it will be ineffectual, as nobody other than the person who commits a rape, can prevent that rape from happening.

The Sober – Tipsy – Violent posters could be appropriate. Warning men, in particular, that if they get really, really drunk, they may become violent and act in ways they shouldn’t, could have an effect on preventing violence. I don’t know whether it would, but I don’t have an objection to them trying.

The Sober – Tipsy – Victim posters, however, will have no effect at all on prevention of violence and sexual assault. Anybody can be a victim, anybody can be raped, regardless of whether they are drunk or sober. If somebody is very drunk there comes a point where they are unable to consent at all, so posters saying, “Don’t have sex with somebody who is so drunk they don’t know what they are doing or where they are” could also have a place.

“Don’t get drunk in case somebody else uses their own free will to abuse their power and hurt you, which of course they could equally do if you are sober and which, while we’re on the subject, is much more likely to happen in your own home by somebody you live with, again regardless of whether you have drunk wine or not. However, don’t get drunk, whatever you do, otherwise we will blame you for somebody else’s abusive actions” is how I would paraphrase this sadly all-too-prevalent message.

If you are raped, it is never your fault. Whether you are drunk, sober, on drugs, naked, covered in clothing from head to toe, at home, in the street, in an alleyway, at school, at work, in a car, walking home, in a taxi, not in a taxi, wearing a pony tail, whether you have consented before, or are a virgin, or a lesbian, or any other variation of behaviour or lifestyle.

Derbyshire County Council and Derbyshire Police should know better, and can be contacted here and here.

[The image is a graphic of a poster which reads at the top “Gauge Your Behaviour”. Below that is a gauge which goes from Sober to Tipsy to Victim. The text reads “Where will drinking put you?” and at the bottom are the logos of Derbyshire County Council, Derbyshire Constabulary and Derbyshire Crimestoppers.]