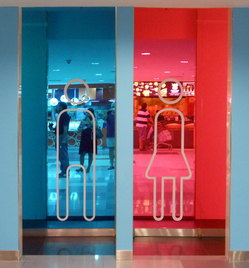 This is a guest post by Dr Laura Nelson. It follows Part 1, published yesterday.

When Hamleys ditched its gender signs, the story blew up like a bomb going off.

It is now more than a week since the media whirlwind began, and a good time for me to reflect on the campaign. As media coverage continues to trickle out, gradually subsides, and morphs into other debates, I have been mulling over what happened. Why did it work so well? What can we learn for future campaigns?

The first point to note is the astonishing amount of media coverage. So much attention is unusual for a gender equality story. Feminism exists to expose invisible injustices, and, by its nature, feminism often goes unnoticed too.

The second point of interest is the huge amount of resistance and controversy this story created. People were intrigued, horrified and angry. They wanted to swear and rant. They thought I was mad – or a menace. Controversy sells. This no doubt explains the point above.

I am no stranger to resistance. I have been writing a political blog [http://delilah-mj.blogspot.com] for two years, and – like many other feminist bloggers – I have learned to brush off the trolls like flies on a hot day. Resistance means I have got to the people who matter.

Over the course of writing the blog and interacting with my readership, I have noticed the argument always seems to arrive at the same place. This is the crux: are men and women fundamentally (biologically) different in terms of cognitive (thinking and reasoning) abilities? If yes, sexism can be justified. If not, it can’t.

Many scientific studies have been carried out in this area. They are notoriously difficult to carry out and notoriously difficult to repeat. As yet, there is no scientific consensus that boys and girls are born with differences in aspirations and cognitive abilities, such as problem-solving. Conversely, environmental conditioning is much more likely to affect skill development.

The conditioning by children’s toys – and the segregation of toys in shops – is insidious. Gender stereotypes are highly influential and pervasive, and influence children’s and parents’ choices, aspirations and expectations. Instead of encouraging children to pursue activities according to their individual talents and interests, they encourage children to pursue a narrow range of activities, consistent with stereotypes we see in our society generally (women in passive, caring and homemaking roles; men in active, leading and aggressive roles).

Challenging the segregation of Hamleys toys is therefore at the heart of the nature-nurture issue, and pivotal in feminist debates. At the same time, the upholding of gender stereotypes, and beliefs that men and women, and boys and girls, should behave in certain ways, are strongly ingrained in our society. This means that the debate is always heated. The Hamleys story was loaded with gunpowder. It was a winning formula. When it blew up, the shots went everywhere.

There are other factors too. For a campaign to work, it has to be more than just a good idea.

The first essential factor is support. I learned that this is one of the most important aspects of a campaign; I could not have done what I did without a core of supporters and I am grateful to them. People who backed me up, retweeted, suggested ideas. Many other feminists who have written and campaigned on this issue and continue to make a difference. Friends who sent me messages and called me, during the media deluge, to check in.

The second is strategy. Timing is vital. Planning and communication are key. I will do even more of this next time. The skill is to put in place everything beforehand so it is ready to go off all at once – like putting a match to a dry pile of sticks. Whoosh.

Third, I have realised the importance of courage; of acting despite moments of doubt. In the few weeks before I wrote the letter, I was unsure whether to proceed. I felt the same as when I had once perched on the edge of a cliff, about to jump off with a hang glider. In the end, I reached the ground safely, and I had a brilliant view along the way.

I’m glad I did the campaign, and even more glad it worked and has opened up debate. I will have a content Christmas, knowing the presents children receive may be a little less restricted than they used to be.

[The image is a photograph of the entrance to some toilets. On the left is a blue lit door, and on the right a pink lit door. Each has a familiar male / female symbols on. It was taken by Michael Coghlan and is used under a Creative Commons Licence]