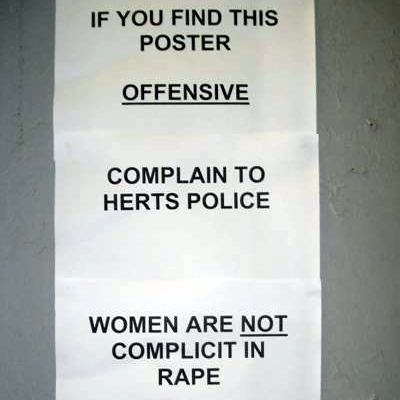 I was coming back from a Christmas party the other week, when I saw a poster at my local station aimed at young women. The poster told women “Don’t let a night full of promise turn into a morning full of regret”, and showed a thinly-dressed girl unconscious on a floor. The implication is that women who get raped are somehow culpable if they have been drinking.

This is another horrible example of victim-blaming, where if a woman has a few drinks, or wears a short skirt, or walks down a dark alley, she is “asking for it”. Why are the police implying that women are complicit in their own rapes?

It’s the party season, and many women will be experiencing the tricky social balancing act required to get through hours of work and other social events without becoming incapably drunk. It’s not an easy task. We live in a drinking culture. We are pressured to drink freely and it can be hard to keep track of how much you have had until the room spin hits. I used to have a boss who loved drinking games. Until I got wise to it, I suffered some painful wobbly experiences dragging myself home, having been forced to drink far more than I wanted or needed.

While the police have a perfectly valid point about self-protection, what makes me furious is that they are focussing their time and energy on profiling victims instead of their rapists. Why are they spending money on this instead of trying to increase our criminally low rape conviction rate – just 6.5%? 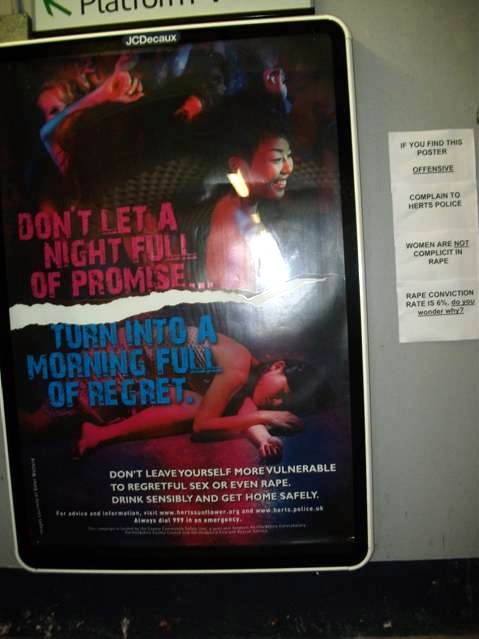 Surely one of the underlying reasons we have such a poor conviction rate in this country is the widely-held attitude, which this poster supports, that women somehow ‘invite’ rape by dressing a certain way or by being vulnerable through drink. We are told not to leave our glasses alone in bars, as if the problem is with us instead of the perverts who stick GHB in our drinks.

The police know perfectly well that alcohol tends to make violent men more violent – look at the rises in domestic violence around match days. But where is the poster campaign to tell men to drink less at Christmas? Instead, they go for the cultural soft target, women. Only 20% of rapes get reported to the police according to the BBC, perhaps partly because many of the women involved are conditioned by exactly this sort of campaign to believe that they somehow encouraged what happened to them. The police choose to play up the ladette stereotype because it’s easier to blame the victim than to tackle the wider cultural problem.

So – I complained to the police, and put up a poster expressing my feelings. And it turns out there is (allegedly) a twin version of the poster, aimed at men, warning men not too drink too much or they might rape someone. So they have been taking some advice from women’s groups. But seriously, that doesn’t make the women-poster OK.

It is not okay to focus on the behaviour of victims of crime when we are not, and never have been, the problem. Of course we should educate women to be aware of risk situations around alcohol. But it is not the job of the police to tell women it is somehow their “fault” if they get raped. That is not the kind of message they should be sending, at least until they start doing a better job of banging up the criminals in the first place. Join me and complain to Herts police!