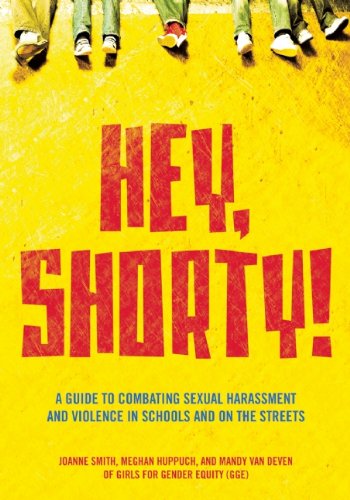 Hey, Shorty!: A Guide to Combating Sexual Harassment and Violence in Schools and on the Streets

Hey, Shorty! is an account from a group called Girls for Gender Equity, who work to “encourage communities to remove barriers and create opportunities for girls and women to live self-determined lives” through “education, organising and physical fitness”. The book left me feeling optimistic and energised; their project has already accomplished so much.

However, it isn’t really a how-to of activism. The cover promises “A Guide to Combating Sexual Harassment and Violence in Schools and on the Streets” but I’m not sure if I would describe it as a guide.

It certainly isn’t prescriptive and there are few rules or guidelines laid out. In the entire book there are only three ‘rules’ for group activism – but they are more observations and are hardly bullet-pointed and highlighted. However, amongst the anecdotes and the narrative of their successes and failures, there are a few black pages with white text which explain a law in detail or describe clearly what constitutes sexual harassment.

GGE is a group based in New York which works with young women of colour. It perhaps goes without saying that although their project works within their social context, it inevitably needs slight tweaking in order to be applicable to other situations.

As the book is from the USA, they discuss the Title IX legislation in great detail and explain how they used that particular law to combat harassment in schools. It is interesting to read about how the law (which applies to state-funded education programmes or activities, requiring them to ensure equal access to education regardless of gender) is used by the group in an unusual way; obviously readers in the UK will have to research which legislation will be most helpful to them.

You may have experienced street harassment, or have maybe heard of the Hollaback! campaign. Hey, Shorty! covers the issue of ‘harmless’ catcalls creating an atmosphere which is hostile towards women and girls.

The book details how the group originally came about as a sports session in the local YMCA. Their focus on sport and fitness strikes me as a positive way to combat the impression girls can get from our culture that their bodies are passive and only for decoration. It also gives girls a space to go where they don’t have to ‘be’ for other people (e.g., take care of their younger siblings).

In my experience when I speak to children, teachers and parents about the issue of sexual harassment in schools, there is a sense of frustration that not enough is being done

The group’s focus changed after an eight-year-old girl from their local area was raped; the sports session turned into a discussion about the girls’ feelings surrounding the rape. The facilitator was dismayed to hear victim-blaming coming from the girls: “she deserved it”, “she was fast”, etc. These opinions, although always misguided, were particularly shocking considering they were talking about an eight-year-old.

This event led to a protest march, a town hall meeting, a newsletter and eventually to all of the other fantastic actions and groups stemming from the original nucleus of a sports session.

Although in its entirety, the book might be a bit complex and detailed for a younger teenager, there are sections such as the first appendix (explaining exactly “what is sexual harassment?”) which are clear and straightforward. They could be good resources for Personal, Social and Health Education classes or youth groups. The book also covers circumstances in which boys find themselves being harassed, and so would be appropriate for a mixed-sex class or group.

This appendix is a great resource; it includes myths about harassment (e.g., “If you don’t mean to make someone uncomfortable, it isn’t sexual harassment”) and a selection of guides for people in various roles (e.g., students, school staff, parents) on how to deal with harassment in schools. In my experience when I speak to children, teachers and parents about this issue there is a sense of frustration that not enough is being done, and that it is a big deal which is affecting children’s experiences of education.

On a personal note – my daughter is only 10-years-old and she goes to a small, ‘nice’ school which generally does take bullying seriously, and yet she is subjected to these sorts of ‘jokes’ and comments regularly. She found this section of the book very useful.

There is another appendix with the template for the survey the group used, which is a good resource if you’re planning something similar. 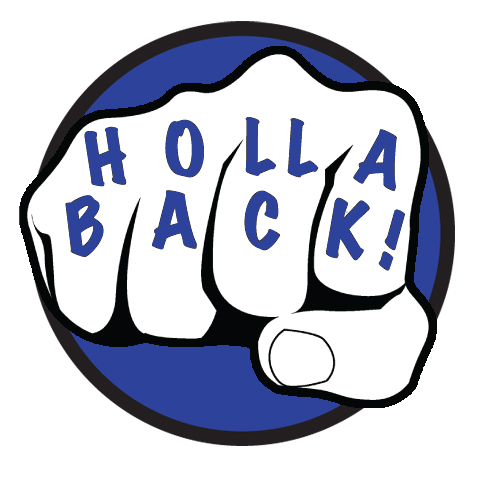 The book contains an explanation of Participatory Action Research which seems ideally suited to feminist projects, although it’s apparently a difficult model to use within university courses. However, if you don’t have to win the approval of a supervisor, it sounds like a brilliant way to research feminist issues. It’s a way of researching something in collaboration with the group being researched: they help design the goals and methods, and then help analyse the data. It means that instead of being passively observed, they can learn something about research and have a degree of control over what is done with their information.

Something I found fascinating was the way that GGE had interns from within the peer group and from college who were able to go on retreats and learn about research methods. They chose in which direction to take the research, and selected methods of gathering research which they believed would be most successful within their peer group. Young women were also enabled to make and exhibit a film about harassment. The collaborative grassroots approach really appealed to me. A project directed from within a group is bound to be more successful than one brought in from outside.

They involved their whole community with activities such as a Sisters in Strength dance, Gender Respect workshops in schools, a Gender Equality Festival and Mother Daughter Health and Play days. I got a sense of a huge amount of energy and creativity carrying the ideal of gender equity – it sounded like a great deal of fun instead of being dry or preaching.

As the book included quotes from the people affected by the project I felt caught up in how exciting and important it was. From the first Mother and Daughter Health and Play Day (“I didn’t know you could do that”, or “I didn’t know you could run so fast”), to a Gender Respect workshop exercise looking at qualities of boys and girls, which was originally full of stereotypes (“Write ‘brave’ under girls too. I am brave”).

Also, as the book is a collaboration of many different people, there truly are many voices speaking about different experiences. As well as the founder and other senior members of the group, there are contributions from many other people who were directly involved with and affected by GGE’s work. It left me feeling that this group is indeed one that has been successful and has lots to share about the trials and the successes of a project like this. I also feel that we need many more similar projects because girls everywhere need a space to talk about their experiences in a sexist society. A group that shows them how to organise and effect change is an amazing asset to any community.

For more information on Girls for Gender Equity, please visit their website, their Facebook and watch the trailer for their Hey, Shorty! film.

Image above of a clenched HOLLABACK! fist from draggin used under a Creative Commons License

Sara Clarke is a full-time angry hairy feminist, mother and troublemaker who is interested in disability issues, parenting and geekery as well as the usual stuff. She has a degree in Modern Languages (which she says isn’t as useless as it sounds) and she likes to read, when she can hold the books