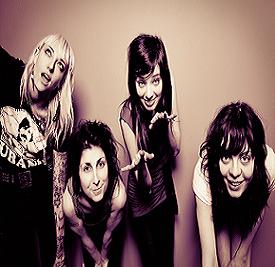 New Review: The Re-emergence of Riot Grrrl music and politics?

Riot Grrrl celebrated its 20 year anniversary earlier this year, and Hayley Foster da Silva is pleased to discover evidence of its legacy in the form of Atlanta’s Coathangers and Oxford’s Secret Rivals

On the surface, it might seem like the era of Riot Grrrl, spearheaded by such feminist icons as Kathleen Hanna and Corin Tucker has long since faded from view. But it needs to come back. Not only because of the lack of female music in the charts, but also because there is so much to be angry about at the moment; our political system, all the cuts, university prices, and the fact that we are still fighting many of the same battles we have been for years regarding feminist issues.

The original riot grrrls had something to say because they were angry and there is still so much for women to be angry about. Luckily for us, it seems like Riot Grrrl may be making a reappearance: The band The Coathangers have emerged with their own take on the genre. The biography on their website even implies that they have the same attitude: they had already decided to be a band before they were able to play instruments, the instruments came later.