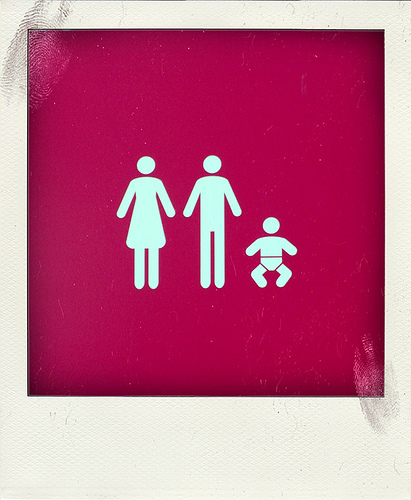 Families are not factories

My parents have been married for thirty years. I grew up in a semi-detached house in a suburb, one of three kids. The only surprise in the set-up is that we don’t have a picket fence. It was a Tory government’s wet dream of an upbringing.

Somewhere along the line, though, something went wrong. The conveyer-belt churning out endless, identical replications of this ideal kinship model hit a snag, shuddered and stopped. It turned out one of the slightly-more-than-2.4 kids was queer and at least one of the others didn’t really give a damn about marriage. Our predicted stable, nuclear futures wobbled as reality, in all its glorious diversity, failed to conform to ideology.

Thank god, then, for the government, who have announced the return, albeit in diluted form, of Thatcher’s Clause 28. Children in free schools or academies will in future be receiving heterosexist brainwashing instead of Sex and Relationships Education. Perhaps they can halt the cultural decline in straight people buying into holy matrimony by literally legislating for its ideological imposition?

How obnoxiously weird that a practice designed to institutionalise the exchange of women-as-commodities should, in 2011, be being brought back as if it’s the only excellent kinship model. Over one third of marriages end in divorce, we know that only about 50% of people get married anyway – why do conservatives insist on touting the myth that marriage provides a stability that other forms of relationship don’t? Could they actually believe it, or is this a Dorries-esque way of grooming the next generation’s prejudices against the rights of those who threateningly queer the picture?

Against all the evidence suggesting that other relationship models are also great, we are hugely invested in the ideal of marriage, in particular, in the importance of marriage to women. Popular, mildly-misogynist TV shows Don’t Tell the Bride and Four Weddings (both guilty pleasures, I admit) speak to this, camping up the ‘greatest-day-of-her-life’ aesthetic until it is too absurd to take seriously. Unless you’re Michael Gove, who presumably resolved to bring back Clause 28 during the Don’t Tell the Bride adverts.

Given how much pro-marriage marketing we receive, perhaps it is not surprising that our common cultural conception is that it is vaguely ‘best for children’ if they grow up with married hetero-parents. The viciousness of anti-single-mother rhetoric, returning time again to narratives of blame and failure, only compounds this problem. The government spectacularly fails to consider the possible impact of such negative socialisation on children growing up in single-parent households.

No matter. It is best for children to be brought up by married heterosexual couples , apparently, because two parents provide more stability than one. If an extra parent is so great, why wouldn’t it be better to have more than two? Why not four? Or ten? Why don’t we bring children up in communes, as envisaged by our feminist foremothers?

I want to know why a marriage certificate makes a difference, if it is not just to get couples bogged down in financial commitments to each other so that they can’t separate. I’d like to know, moreover, how it could be better for children to grow up the company of two parents who would really rather have gone their separate ways, and why it is thought to be right that parents abnegate those – potentially eighteen – years of their lives ‘for the sake of the children’. I’d like to know why gender is presumed to make a difference to that equation, why God is genuinely believed to have given a shit about anybody’s chromosomes.

Clause 28 is a case of cart-before-horse. There is nothing inherently better about nuclear families except the belief that they are better (coupled with tax breaks). If the children of hetero-marriages turn out to be better adjusted, whatever the hell that means, than those from other families, we need to look at the ways in which the former set of children are systematically culturally privileged and change the system accordingly. To conclude that marriage is best and should be preached to kids is question-beggingly circular. It perpetuates the cycle, excluding those who can’t or won’t fit.

I have seen at first hand that a heterosexual marriage can provide a stable upbringing in which children can grow. But I would contend that if there is anything about my orientation which would prevent me from bringing up kids in just as good a manner, it is the attitude of Gove and co, who, through Clause 28, will attempt to make sure that the society my children will grow up in will be even more full of hate than the society we have now. Thanks Gove, you utter wanker.

Image by flickr user the|G|™ shared under a Creative Commons license. Image is polaroid-style showing a sign on a pink background with stick-men representations of a man, a woman and a baby.