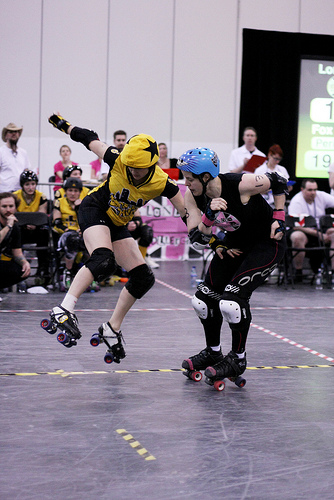 Sportswomen of the Year 2011: roller derby

After the BBC announced a female-free shortlist for Sports Personality of the Year, throughout December we are running a series of features and guest blogs celebrating the achievements of sportswomen from the UK.

This guest blog is by Jamie Potter.

If we’re to talk about Sports Personalities then roller derby surely needs to be part of the equation; the sport is brimming with them. Not only are its participants upping the athletic standard with the London Rollergirls (LRG) holding their own against top American sides, the wider community is one of the most welcoming and supportive I’ve had the good fortune to be a part of.

For those unfamiliar with the sport, it’s a full contact game in which two teams of five girls fly around an oval track on quad skates. Offensive ‘jammers’ score points by lapping opposing ‘blockers’, who do anything within the rules to prevent passes being made. Roller derby was revived in Texas in the mid-noughties and has spread quickly. It is now the fastest growing women’s sport in the UK, with over 80 leagues across the British Isles.

The first weekend in December witnessed a new milestone for roller derby with the first ever World Cup; a purely DIY affair hosted in Canada by Toronto Roller Derby and Blood and Thunder Magazine. Teams from thirteen nations competed, with many supported by leagues (as teams are known) and players back home who stumped up travel funds for their compatriots.

England, Scotland and Ireland all fielded teams with England managing a superb third place finish. Scotland finished 11th and Ireland 10th. The USA ultimately triumphed, as many expected, but there is much to learn from the rest of the competition, which was an opportunity for players around the world to test themselves against each other and boost the game’s profile.

Team England went into the tournament as number three seeds, dispatching Argentina and Ireland in the group stage and France in the elimination round. A closely fought defeat to Canada dashed their hopes of bouting with the USA in the final, instead lining them up for a third-place battle against Australia, another fast-growing roller derby nation.

Many players skate under a nickname but some have taken to using their real names. One such player is Stefanie Mainey who led the charge against the Aussies alongside Kamikaze Kitten, Jack Attack and Juicy Lucy. The antipodeans took an early lead but England, coached by Ballistic Whistle, soon pulled it back and raced ahead to an eventual 203-85 victory.

2011 may be considered the year the UK ‘arrived’ on the international scene, with LRG also becoming the first team outside North America to participate in the annual championships held by WFTDA, the organising body. LRG won many new fans with their fifth-placed finish at the East Region Play-Offs and the same Stefanie Mainey was named Most Valuable Player of the tournament, a huge accolade.

Mainey is a lead contender for Sports Personality of the Year but with me being fairly new to derby, still learning the ropes and meeting new skaters, to pick one personality in particular is hard. When I also consider the dedication of so many other girls (and guys) in roller derby to the development and support of each other and the game it becomes even harder.

For instance, a South American skater in my own league who disliked Christmas away from home is looking forward to it this year because of the friends she’s made through roller derby. Such a community ethic is a major part of the sport with leagues even helping each other in training and organising off the track before running each other ragged on the track.

It’s this aspect which raises the most interesting thought for myself: the role that sport can play in communities and how roller derby in particular can be a positive movement for women. In picking a sports personality are we thinking purely about their achievements in the game or something more? That’s not to say that women in other sports don’t help each other as I know, in fact, they often do. But in roller derby it’s a key part of the game, the “derby spirit”, and for many participants these amazing personalities are its best feature.