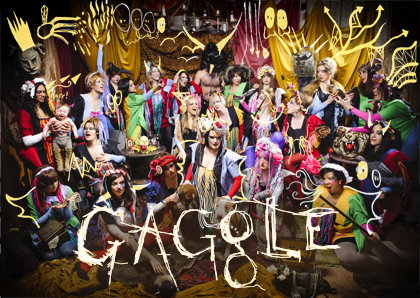 “A 20-odd-piece alt.grrrl choir, what can you say? …It’s exciting to stumble upon something like Gaggle… unless you mainline LSD and read The Female Eunuch from morning until night – unlike anything you’ve ever seen.”

We’ve got two free pairs of tickets to give away for all-woman punk choir Gaggle‘s Christmas show at the New Empowering Church (Westgate Street, London) on 15 December (this Thursday)!

The show will preview material from Gaggle’s forthcoming album and I’m told they will also be treating the audience to some seasonal surprises. Those of you already familiar with Gaggle will probably already know their debut single “I Hear Flies”. For those of you who don’t, I’ll let the track speak for itself:

Led by Deborah Coughlin of 586, Gaggle have been described as “a response to boring man bands, bad burlesque and an alternative place for women in music that doesn’t involve drinking yourself to death out of boredom or anxiety.” Their most recent performance, a radical reworking of The Brilliant and the Dark, at the Elgar Room at the Royal Albert Hall was sold out so grab this opportunity while you can!

We’re doing this on a first-come-first-served basis, with the first two people to comment winning a pair of tickets each. Don’t forget to leave some contact details if you’re logging in through Facebook. (We won’t need this if you have a Twitter page and we’ll already have your address to hand if you’ve registered with an e-mail address.)

Picture of Gaggle supplied by Work It Media.

Edit: This offer has now expired and winners were informed at 19.00 on 14 December (see second comment below).