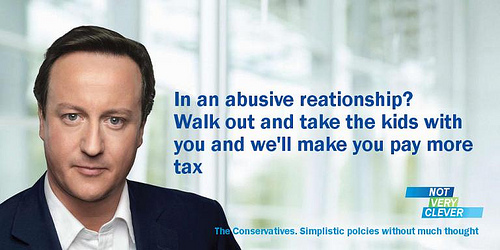 Tory feminism. I’ve been avoiding blogging about this because the sheer physical pain that swells up in my fingers when I type those two words in succession, not to mention the blood boiling in my veins when I see Louise Mensch’s smug little face staring out at me – yet again – from the pages of the Guardian Online (can we stop giving her column inches already?), is almost too much to bear. But in the face of this complete and utter nonsense, something clearly needs to be said.

Because feminism is not about privileged rich women overcoming sexism to make it in a world run by privileged rich men. Feminism is about ripping down the barriers that prevent ALL women from determining the course of their own lives. Sexism is but one of these barriers. So while it’s all very nice that a select few female Tories sort of support abortion rights and think Page 3 should be banned, they can only claim to be feminists if they also address the other barriers that women face: ableism, ageism, class privilege, homophobia, racism and transphobia, among others. They need to understand that sexism intersects with all these other oppressions, that they can’t just address the bits that affect them as privileged rich women then paint the rest of us as lazy, good-for-nothing scroungers if we don’t reach their dizzying heights of success.

I was going to list all the glorious ways in which our Tory MP “sisters” and Mr Cameron, their knight in shining “male feminist” armour, have been kicking the rest of us in the teeth furthering the cause since they came to power, but Nat has already posted an absolutely fabulous take-down of Mensch’s piece, complete with links aplenty, so I shall direct you over to Forty Shades Of Grey instead.

Mensch claims that she and her blue feminist pals “sit behind a frontbench that we know to be relentlessly focused on social justice and women’s issues”. I can’t decide whether it’s utter contempt for us plebs or privilege-induced delusion that makes her think we’d believe her.